Unruly Rooster? How to Train Your Rooster. 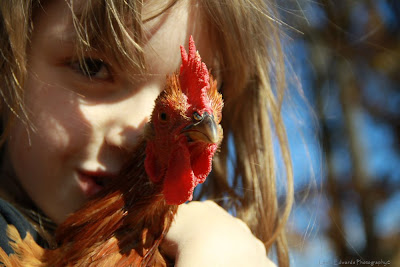 The problem with kids and roosters is that children are more their size and usually do not move with determination.  Some kids are born to it and don't run when a rooster confronts them but most will flail their arms, scream and run backwards~heck, even most adults give this reaction.  This is just encouragement for a rooster to continue the attack. 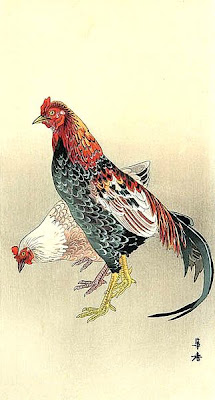 You really don't need to carry a stick to beat off potential attacks but a stick can be a great "guide" for livestock.  If you've ever seen children working beef and pigs in the show ring  they usually have a wand of some type that they use to signal that animal to turn or stand or set up for the judges.  It's just an extension of their arm and it used as training tool.  This can be done for sheep as well when wanting to move them...just a touch here or there on the flank or shoulder can turn them.  I've implemented it with chickens with good success.

When working with children and livestock, one has to be quite clear about the objectives and you need to put in the time to help a child feel confident around the chicken.  That confident stride, stance and attitude goes a long way towards the training of many animals and also works on chickens.  When my own rooster Toby was little he was treated like the rest of the flock… only handled when necessary and in a calm manner.  Toby transitioned into sexual maturity without any display of power towards humans and can be taken off the roost and worked with no problems. This is important when dealing with big roosters and Toby is a large and heavy guy.

Any bird at any time can flap and claw when picked off the roost and the person's reaction to that demonstration goes a long way towards establishing mutual trust and respect.  My children were prone to getting excited when this happened and would almost drop the bird by trying to avoid the commotion, but it's important that you let the bird work it out while you hold them gently but firmly.  That bird needs to know that you aren't going to hurt him, drop him or otherwise disturb his equilibrium.  They soon calm down.  All movements around livestock should be deliberate and with some slowness...quick movements get them into high alert.  It's just instinctual for them to react to this type of movement in a defensive or flight action.

There is only one time I advise quick movement around a rooster and that is immediately after an attempted or full attack happens...this needs to be confronted in a calm and assertive manner and then a very quick correction needs to happen.  If you've trained your rooster properly from a youngster, it's likely you won't get to this point.  But if you obtained a rooster from somewhere else that has not had sufficient training, you will need to know how to train him really quickly and in a hurry.  I've never had to use this method more than once. 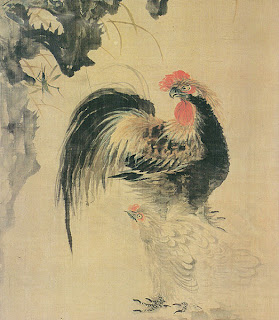 This is where the rooster stick comes in handy.  I'll give you an actual example:  I was given a 6 month old rooster, a truly beautiful and extremely large specimen that was calm and fine when he first got here but was soon to start feeling his hormones... previously he had been in a bachelor's pen.  One day Iwas walking past him with an empty egg basket and he ran up and attacked the basket.  I shoved him off the basket and stepped over to the coop to get the roo stick and went in to feed.  When you feed once a day, everyone comes to the coop when it's feeding time!  I waited until the rooster came in the coop and was starting to eat and then I gave him a sharp but light tap on his butt… right on the fuzzies.  He jumped and looked around and I was already repeating the action.  He ran for the pop door.  I waited...he tried to re-enter the coop and I hit the door facing really hard with that stick so that a resounding "THWACK" happened right in front of his face.  He ran.  He came back and tried to get in the coop, I hit the door facing again.  He retreated.  Then I let him in but everywhere he went in the coop I was touching his back with that stick until he was dodging and ducking to avoid it.  Just when I had him frantically looking for a way OUT, I hit the floor of the coop hard with the stick and the sharp crack sent him streaking for the door and across the yard.

I went about my business but the rest of the day, as I went about chores, I tested his reaction to me... I'd deliberately walk near him to see his reaction.  If he didn't immediately try to avoid me, I'd lunge in his direction and stamp my foot on the ground.  He RAN like a scalded dog.  I only had to do this twice before he got the message.  After that I'd deliberately confront him when I walked amongst the chickens, move in his direction and focus on him.  He always kept himself about 10 feet away from me.  Wise rooster.

If you'll notice, roosters are the kings of the surprise attack… one minute you are walking along and minding your own business and suddenly you have this feather duster raging at you from out of nowhere.  I simply turn the tables on them and give them surprise "attacks".  Never had to repeat this simple lesson for any rooster in my care.  The ones I raised from chicks never had to be taught the lesson at all.

For children raising cockerels for showing, working with an adult that has a calm assertive attitude towards the birds will teach them the same manner.  Have them wear protective clothing, show them how to hold and handle the bird, particularly if the bird is struggling.  Teach them to respect the pointy parts... very important for them to be aware and wary, but not scared.  If a rooster advances towards their position, they need to advance also and stand their ground.  If the rooster continues the attack, the training stick can be utilized on the ground in front of him.  The stick can be a real tool and an extension of the arm, not a defensive weapon.  It can give a youngster added confidence to have one with him when he first starts training the roosters.  Placing the stick between him and the rooster can give him time to sidestep the point of attack and then retaliate with an instructive touch on the rooster.  A good sharp tap on the fuzzies can send the rooster boot scootin' in the opposite direction.

To simply train a young cockerel with the stick, you just wait until feeding time and he is relaxed and eating...and just touch him lightly but firmly… like a tap… on the back… enough to get him moving.  Keep doing it until you have him going in the direction you want.  When he starts in that direction, ease up.  He has learned that he won't be bothered if he moves in a certain way in response to the stick.  For a kid, this can be a fun thing to do without causing too much tension between the bird and the child.  Just a simple guiding touch with the child in control.  A confidence booster for the kid and a lesson for the rooster.  When he is finally responding to the stick, then let him be and reward him with letting him eat.  It can all be real fun if it's done as a planned session instead of a knee-jerk response after an attack.  Don't wait until they are sexually mature to start this training.

Calm, quiet and assertive are what the child needs to learn and the animals will soon recognize someone they can trust and respect.  Toby hasn't forgotten his training from his younger days when I used the stick to move him around or out of the coop.  Now I don't even need to use the stick, I merely point towards the door and take a step towards him and he leaves.  It's fun to reinforce the training now and again to refresh their memory. 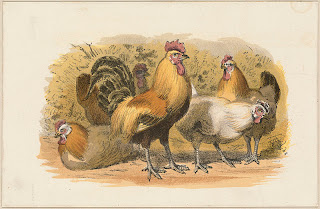 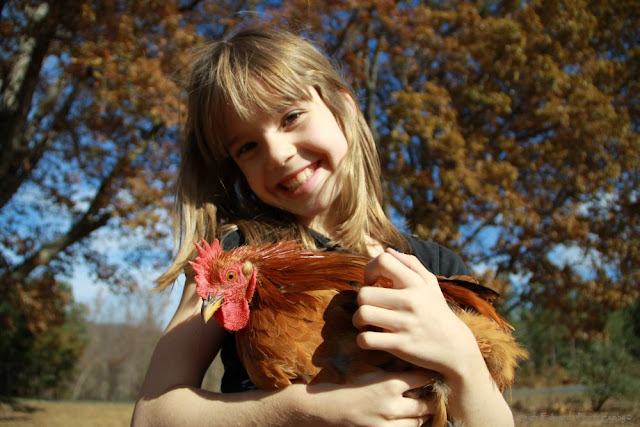 Posted by Bulldogma at 8:33 PM