I spent a lot of time trying to figure out a waterer that would accomplish several purposes:


I had originally planned on doing the "chicken water nipples" and purchased a couple different kinds to test them.  One of the types dropped too much water resulting in wet stinky litter below.  It did not leak, just let too much water out when the chickens drank from them.  The second nipple I tried didn't let enough water out (!) and the birds got discouraged and didn't like drinking from them.  In the end, in my opinion and experience with them, they were an "unnatural" way for a chicken to drink, and they never really liked using them.  Not to mention that I couldn't use them inside the coop without having come kind of a "catch pan" below them to keep from having a mess in the litter.

Then... I found the mini cup waterers.  These waterers were designed to be used on PVC pipe with a low pressure water hose connected to deliver constant fresh water.  I DID NOT want to use them that way as I wanted to be able to use my waterers for winter as well as summer.  Obviously a PVC pipe system would freeze up so that was out of the question.

After gathering some information, talking with distributors, and thinking it through a little bit, I decided to try an experiment to see if the waterers could be used on buckets (similar to the nipples - just attached to the side instead of the bottom).  [FYI - when I spoke to the owner of Cornerstone where I purchased the cups, he told me he didn't think they'd work on a bucket.  He was wrong!]  I have been using these on the bucket since late summer and they're working wonderfully!  Now, for some photos, videos, and winter assessment: 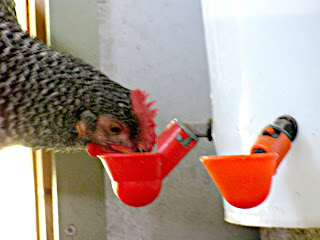 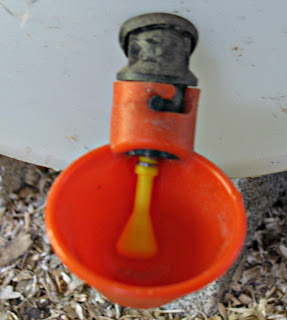 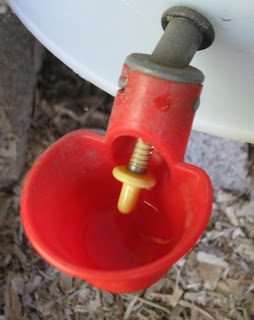 These cups have stems with threads on them.  I used trial and error to figure out what drill size I'd need. (Have to apologize that I can't find the size marked down anywhere.  I plan to do some more and I can update with the size then.)   Then I visually marked where to drill the hole in the side of the bucket so that if the bucket was sitting on the ground, the cup would be above the ground.  I wrapped the threads with plumbing tape and screwed them into the bucket.  Bucket was free from the local supermarket's bakery department.

Note:  if you look closely at these, you'll see a rubber ring that's between the bucket and the waterer.  I went down to Lowes and some O rings that would fit as I thought that might keep them from leaking.  Not sure I needed them but I put them on anyway.

On both of these:  As the chicken puts their beak in, it moves the nipple and releases more water down.  The cups stay mostly empty - it's tripped when they put their beak in the cup.

Easy to clean out.  When stuff gets in the bottom of the cups from their beaks, I either take a wadded up paper towel or an absorbent rag and sop up any water and wipe out the cup.  You can also just turn them upside down to dump the water then wipe out.  I've found that the amount of water in the bottom of the cup is so little that it doesn't hurt to turn it into the litter at all.

Here's what the bucket looks like.  BE SURE NOT TO PUT A TIGHT FITTING LID ON TOP.  Same for nipple waterers.  If a lid is closed, it creates a vacuum and no water will be let down.  KEEP YOUR LID AJAR. 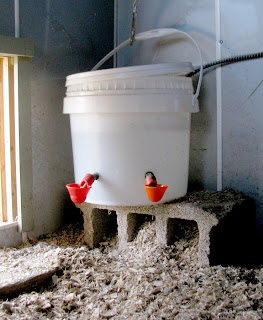 You can see a strange chain up there.  The only reason I have it is to keep the birds from jumping on top of the bucket and roosting.  I was concerned that they'd jump up there and end up IN the bucket of water since the lid is always ajar. 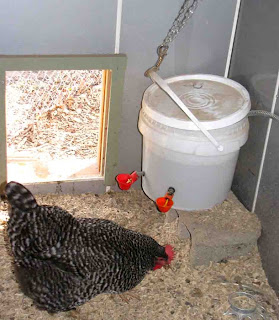 For winter, I put a bird bath feeder into the bucket.  These are thermostatically controlled to come on near 35 degrees and shut off around 40 or so.  Here's the bird bather heater looking down into the bucket.  You can see a glass Pyrex in there.  I have since turned the glass upside down and set the bird bath heater on top of the upside-down glass.  This will gets it closer to the waterer mechanisms and, I think, give me a better shot of keeping them thawed.  I like the Pyrex either way so that the heater isn't sitting on the plastic. 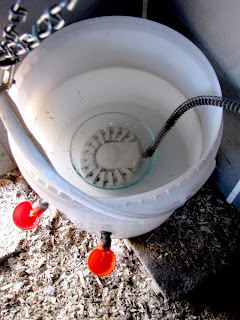 WATERER ADDENDUM:
I have a broody that is by herself in a separate part of the hen house so I wanted to make a waterer for her to use.  I didn't have a small bucket at the time so I decided to try one of the cups on a pretty thin-walled container that I had lying around. I wasn't sure this would work since the plastic sides are much thinner and more pliable than the large buckets.  The rigidity of the wall of the bucket is pretty important to keep it from leaking.

I have been using this for a number of weeks now and it's doing great.  I just have to be careful when handling the cup at all due to the thin, flexible plastic.  I'm going to replace it with a little heavier bucket sometime soon, but wanted to share this just so you can see how it's working.

On whatever container you use, YOU HAVE TO BE SURE YOU HAVE A GOOD AMOUNT OF WATER ABOVE THE CUP WATERER INTAKE!   These are gravity fed cups.

Here are a couple videos so you can see how they're designed to be used and get an idea of how they work.