Chick Health: Is It Splay / Spraddle Leg, Or Something More? 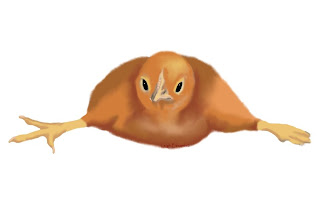 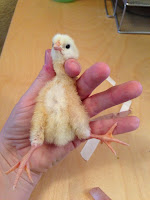 I had two chicks hatch yesterday. They were local eggs and I kept the humidity much higher than my first two tries at incubating. The first one hatched at the end of day 20. It had some of the egg white still in the eggshell. In fact, it carried around a little bit of shell after it hatched. The second hatched on day 21 and had much less of the white.

I left the two in the incubator overnight. I kind of thought chick #2 had a leg problem, but wasn't completely sure until this morning. Here are some pictures. I am not sure if this is spraddle/splay leg or a slipped tendon. I have tried to pull the tendon back into place, but it doesn't seem to give. I am putting pressure on it until the chick squeaks.

In the "natural" position. 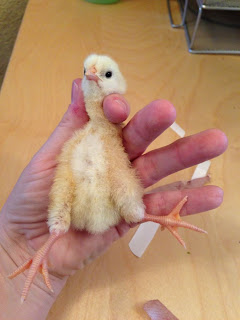 The leg that is not in the correct position. 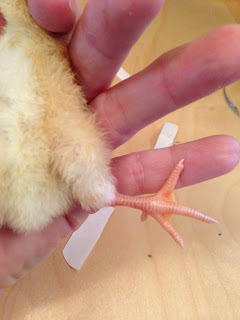 ("Texas" then carefully followed directions for correction of Splay / Spraddle Leg, making a brace from a band-aid.) 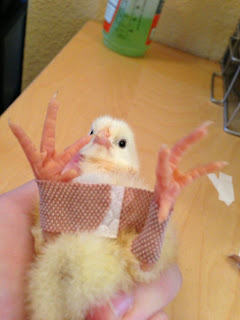 
Is this baby chick getting around/up walking, using the bad leg and it's foot correctly yet?

If there is no improvement within a couple of days with the brace/hobble on, I have a different idea on what the leg issue could be...

Would love to hear what you think might be going on. It is not really walking or putting pressure on the foot. The leg is straightened out now, but it doesn't grasp with the foot.

I was hoping the chick had improved and was zipping around the brooder tripping over it's hobble/brace, by now. I hate being the bearer of bad news...

Judging by how the entire leg looks twisted to me, my suspicion is a rotated femur (which is a deformity, not an injury).

While I am far from a hatching expert, I have incubated a lot of eggs (Guinea, Turkey, Quail, Silkie), hatched out well over 1700 birds... so I've run the gamut of incubator issues and hatcher injuries etc but in my experience with splayed leg (or legs), the leg doesn't turn out from the body. Normally splayed legs are the result of an injury cause by slipping/poor footing which results in a wobbled out/stretched out joint socket that lets the leg slide out from under the body to the side, no rotation of the entire leg is involved. Usually within a couple hours of being braced/hobbled (and the chick or keet has gotten used to the hobble) the leg is used normally, with no favoring, no pain.

You mentioned slipped tendon, and the tendon not budging when you tried to move it... I can definitely see in your pics that the tendon on that leg is not in the correct position over the back of the hock. If it was a slipped tendon it would be easily moved back into the tendon groove (but would probably slip right back out as soon as the leg was bent), which with my suspicion of a rotated femur would be a resulting deformity that occurred during development while still in the egg (not from an injury after hatching). 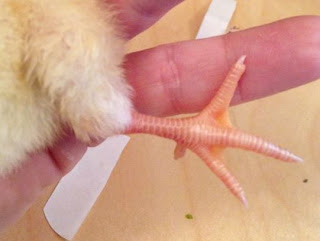 The chick is most likely not grasping with that foot because the femur rotation and tendon deformity are causing it considerable pain. Hopefully I am wrong, but as I mentioned splayed leg is a pretty quick fix if noticed and the legs are braced/hobbled soon enough... which in my opinion you did.

Sadly, Texas did have to cull this chick as a result of its rotated femur. Our sincere Thanks goes to "Texas" and Chrissy in CA for sharing this learning experience with us!
*

Posted by Bulldogma at 3:26 PM