There is plenty of information about keeping a chicken coop clean, but what if the healthiest way to keep chickens didn't involve the daily or even weekly... or even monthly... shoveling and replacing of bedding?

The "Old Timers" will tell you that the "Deep Litter" method is one of the easiest and healthiest ways to keep a coop. 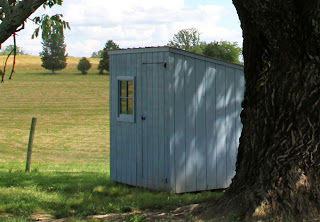 Dirt floors are great for the deep litter method, but "DL" can be done on almost any solid surface at all. It starts with a good layer of pine shavings. Instead of cleaning it all out and replacing it when the poop accumulates, one simply stirs up the bedding a bit with a light rake and tosses another layer of bedding on top once a week or so.

Think of it like a lasagna. stir up the bottom a bit and add more on the top.

Nope - not if it's done properly (and not if your chickens are healthy).

You see, by not removing the waste, good microbes come and make their homes in the litter. These microbes actually eat and break down the feces and consume unhealthy bacteria, leaving good bacteria behind! The microbes also help prevent infestations of lice and mites in your flock. (They won't clean off a bird already infested - use wood ash on infested birds - but can help prevent new infestations from occurring.)

Most folks will clean out their deep litter coops once a year... being careful to leave a 1 - 2 inch layer of the "old stuff" behind. Leaving a bit of the stuff that is already composting helps the new stuff begin to break down and compost too - and that's what you want.
And what do you get when you clean that year's worth of chicken stuff and bedding out in the early Spring? You get the perfect compost and mulch to start your garden.
Surprisingly your coop will smell more earthy and natural. If done properly in a well-ventilated coop, there should be no ammonia or "fowl" smell.
Important points:
Nematodes & Deep Litter:

Fortunately, most species of nematodes have no effect, or have a beneficial effect, on humans and their endeavors. Many species of nematodes are ‘free-living’, living in soil, sea and freshwater. These feed on bacteria, fungi, protozoans and even other nematodes, and play a very important role in nutrient cycling and release of nutrients for plant growth. Other nematodes attack insects, and help to control insect pests. In fact, some nematodes which attack insect pests are reared commercially and released for the control of certain insect pests as a biological insecticide. A nematode released to control the Sirex wood wasp has been credited with saving the forestry industry up to 80 million US dollars per year in Australia.

You can see that creating a good environment in the coop can promote the growth of nematodes that can actually feed on the things that often harm our livestock/chickens.  A good, decomposing deep litter system is like having a great little micro-mini compost heap in your coop.  Good ventilation is key and monitoring the moisture and smell, making adjustments accordingly and letting nature take its course will help tremendously to grow good things in the coop instead of bad things that can cause constant and recurring health problems in a flock.  Straw does not compost very well and tends to get moldy before doing so... not the good kind of mold.  Wood shavings take longer to break down but they tend to stay drier while doing so... good fluffing and turning in a humid climate can also keep them from forming a "cap" of moist pockets on the surface that will grow mold beneath the cap.