SO.... I had a rare opportunity to catch Middle Sister in the daytime this evening and I did that very thing.  I was curious if there was something on her feet I had missed in the last examination.  Of course, most of these examinations are at night when they are easily caught off the roost and the lighting isn't always ideal for really seeing all the surfaces of a foot... lots of creases there. 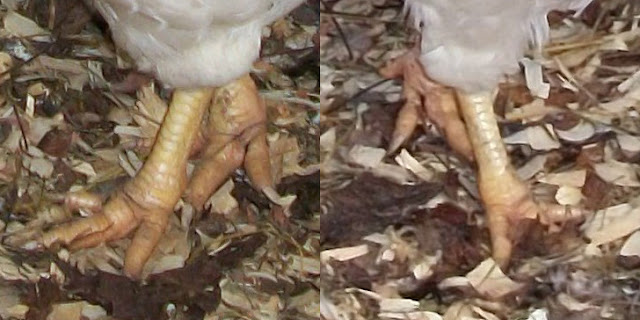 Guess what I found?    She had identical holes deep in the same crease of both feet between the first and second toe.... I wouldn't have seen them if I didn't spread the foot wide and examine every little crease.  She had no sores or scabs or obvious places that one would notice.... just these holes.  The holes were impacted with dirt, hay, grasses and more dirt.  Now, I've cleaned a lot of chicken feet and peeled them for cooking and I've never seen a gland or any such on a chicken's foot but these holes were identical in nature and placement, so I don't think they were wounds.  I'm thinking they are tiny glands in the foot that we never really see as they are deep in a crevice.  I'm thinking these glands were impacted and enlarged due to poor sanitation in their former coop, that led to infection and just became impacted with material.  Sort of like a sebaceous cyst.

The holes were of identical shape and were indeed like a gland in nature, once cleaned out for inspection.  The area around the gland site on top of the foot was red and swollen, which is what brought my attention to that area and when I looked closely, I found them!

It took well over 50 Q-tips to get the holes cleaned out...and the holes were big enough to take the whole head of a Q-tip inserted them.  I mean the whole length and width of the head of the Q-tip!  The dirt kept coming and coming, I dug with QTs and tweezers and just kept at it.  I dipped QTs in peroxide to see if I could boil out any stray debris and this worked great.  There was no pus, no core, no real bad smell... just a faint smell of staph infection (believe me, my nose knows different smells of different bacteria after all these years... ya just don't wanna know) and lots and lots of black dirt and debris.

I finally reached the bottom and the last of the filth, cleaned it once more with peroxide and placed ATB (antibacterial) ointment down into the holes and then packed them with tiny cotton balls off the tips of the Qs.  Then sealed those with ATB oint. and finished it all with a good slathering of NuStock, worked into all areas of the feet and legs.  I'll remove those cotton balls in a week and place more ATB in the holes and let them heal from there.  Now that she is on clean bedding and soils, and her feet are washed in the morning dew each day, she shouldn't be getting debris packed up in that area again.

The ol' gal just lay there, swaddled in a towel, and let me dig and prod her feet like she was enjoying it.  I hurt her one time and it made her kick and poop... luckily, the poop had no smell because she is on FF!   She was really a good patient and I know she will feel a little wooled around tomorrow but I bet she will start to feel better soon....

Who wants to bet this just might work?  Yes...you can all point and laugh at me now that I treated a chicken!  Don't get comfortable...it was only because I know this old bird and I know she has good genetics or I wouldn't have bothered.  She may still be in the pot come spring and she doesn't lay, but at least her meat will be worth the eatin' if she recovers from all this.