I'm currently having a possible cull issue and, since I've never had this problem, am considering all points and am mulling it over according to my standards of care.  I have a Barred Rock that is wheezing at times and coughing/sneezing a little.  She is eating well, drinking well and very active and foraging.  She is moving well and seems bright of eye and action.  She is laying fairly well, though not every day and she is approximately 2 yrs. old.

But... she is the one that has red, bare skin on her lower abdomen that has not regained feathering in the past 3 wks she has been here.  All the other birds have regained feathering even though they are now actively molting.  We have applied NuStock to her reddened skin on three occasions and it looks less red but it is not growing feathers.  Of all the birds appearances, this is the one that is lagging behind in feathering and wt. gain.

Now… do I wait and see if this cold just wears itself out?  Do I wait and see if she gets worse before I cull her?  What if the other birds catch her cold?  If so, do I trust that they will be able to fare well since they are living in healthy conditions and eating healthy foods now?

I don't have a way to isolate a bird here, nor do I think that is the answer.  I think that immune systems need testing to see if they are strong...and this is a test.  Is it just her immune system that is weak or are there others with the same problem?  As they were out of my care for so long and were given such poor care and are only less than a month into recovery, should I be concerned about not culling sooner, in fear that their immune systems are still weakened and susceptible to invaders?

All of these questions are to be considered.  For now I have given her honey and garlic as of last night to see if it would ease her congestion.  Nothing really changed.  She doesn't appear to be getting worse and this is the third day of symptoms.  Colds are viral, so they usually run their course in 2 wks.

It's all a guessing game with these chickens and most of these problems are things of which I've never had to encounter..... I'll keep you all posted on her progress and my decisions about her care or her culling.

ETA:  NOTE:  Three days ago I had placed lavender cuttings in the nest boxes and in the coop....it may be coincidence that this bird, one of the few that is laying almost daily, should experience allergy symptoms, but I removed them tonight and will see if this is indeed a factor in her symptoms.

I think, due to the timing of the fresh lavender clippings in the nest boxes, this ol' gal just may have a simple case of asthma/allergies caused by the strong lavendar oil in the fresh clippings.  Had a similar thing happen once to a donated red star chicken when first introduced to cedar chips...she wheezed and sneezed.  Was the only chicken in the coop to react in that manner and so was given to someone who wanted a pet chicken.  She eventually cleared up after being removed from the source of allergen.

Gnarly Bunch Update:  As mentioned above, removed possible allergen from the coop and will wait and see if Katy AKA Monkey Butt gets herself straightened up.  No eggs today...nada!  The girls continue to look smooth and glossy as they travel through the land of molt...some look a little rag tag but Raggedy Ann, Bertha and Ruby Crockett are looking the most lovely of all. 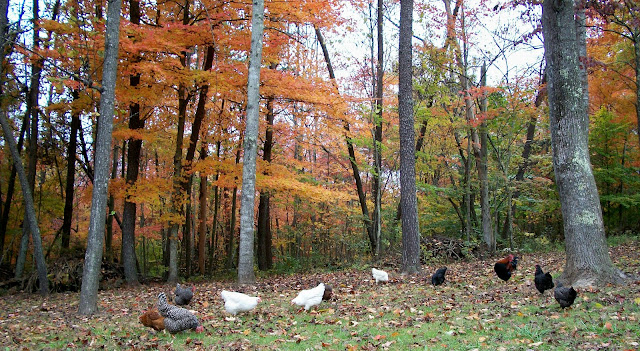 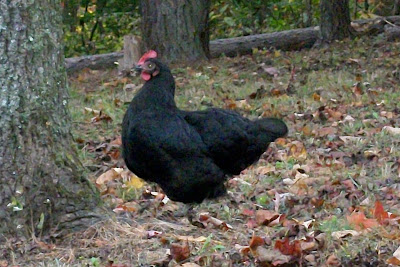 GOOD:   Stumpy's feet look great and she is smoothing out and moving better.  Ruby, as you can see above, is looking great and her vent is looking better each day.

BAD:  The NuStock only works on Jake's fleas as long as it is on his body...he keeps licking it off and the fleas repopulate.  Will make a spray of pine tar solution tomorrow to see if THAT works and if he will lick it off.  Will place a little hot pepper juice in the mix to try and see if he will leave it alone.  Desperate times calls for desperate measures.  Today he got dusted with ashes but it only provided temporary relief and then I saw him out there digging again.  Where will it all end????