Dear Bee,
I live in Colorado and have 9 backyard birds ranging in age from 7 months to 5 years. The birds sleep in a coop overnight but are allowed to free range in the yard the rest of the time. The pen that contains the coop is covered with a metal roof and tarped on the north and west sides.  It is a 10 x10 dog kennel. There is also a small dog house in the pen that has a single nest box in it. The birds lay in the coop and the dog house. The coop is too small to house the birds indoor and so they are never locked up in it even in bad weather but they have access to a wind free, dry pen at all times. The bottom of the coop is covered in wood shavings and the nest boxes are filled with straw. I scoop the overnight poop off the shavings daily and change out the nest box straw monthly. The inside of the coop and perches are washed down spring and again in the fall before winter really sets in. I use a bleach and soap mix and let air dry in the sun completely before putting the birds back.
The area they free range in is divided. One side of the yard is wood mulch with no grass at all (I have a dog who has a contact allergy to grass). The other side is grass which is never sprayed with fertilizer or pesticide or herbicide.

They eat Purina layer crumbles, nutrena scratch wild bird seed with BOSS, I cook special meals for them regularly and they also get leftovers and scraps from the kitchen. They get some kind of a mash type breakfast every day. I add crushed egg shell 3 to 4 times a week to their feed as well as a kelp, nutritional yeast, garlic supplement 2x a week. They also have constant access to oyster shell. I feed minced raw game meat 2 or 3 times during molt which typically occurs in the fall (right now) and again in spring. The water dish is changed daily and has Apple Cider Vinegar added daily as well

The problems I am having are a constant battle with lice, thin shelled eggs, poor feathering, constant head shaking like they have ear mites and the jersey has had a bald patch on her chest since this past spring. I also have 5 out of 9 birds with bumble foot although none of them are evidencing pain or limping. I haven’t seen any worms in the poops. I don’t count on the silkies for eggs and the buff orp has never been a layer so that leaves me 6 active layers and I get anywhere from 3 to 6 eggs a day. I average 4 eggs a day from 6 birds so I feel like egg production is right where it should be but the birds aren’t in optimal health and I’d like to change that.

I have been dusting the birds weekly now for over a month. I dust with Diatomaceous earth (DE) one week and then with permethrin the next week. This summer I cut off the feathers with egg clusters around the vents and dusted birds in an effort to short circuit the breeding cycle of the lice - but no luck. I have washed dusted and sprayed the coop and perches and nest boxes as well. The nest boxes have DE in them. I have not attempted to treat the bumblefoot as of yet.

I don’t know where to go from here. I think I’m doing what I should be but I’m clearly failing somewhere.

I can't say for sure about things unless I actually saw your land and setup but I can make a few suggestions that may be a turning point in their health.

First, it sounds like they may be a little overfed but I can't be sure because I don't know if you feed free choice or by the meal.  All the cooking and preparation of foods isn't necessary for chickens, though I know a lot of people think that's the way to go.  If you make any adjustments to your feeding regimen, I'd suggest moving towards just fermenting the layer feed and whole grains that you currently feed and feeding them once or twice a day until they are doing better, then maybe moving that to once a day.

From the internet:
Bumblefoot - Causes:

When birds are overfed food that contains uric acid, such as boiled eggs, it will provide the blood with a high level of uric acid content, which will then cause the uric acid crystals to pool together in the joints and on the bottom of the bird's feet and toes.

Unsuitable Roosts / Standing & Walking Platforms:
These abscesses are frequently caused by unhealthy "perching" conditions, such as sharp-cornered perches, the standard perches that tend to come with prefab coops of a uniform diameter, or wire floors.

Next, pumpkins are a good supplement in the middle of winter when they lack any good, fresh forage, so I'd let those ferment as well and feed them later on.  Not daily... maybe weekly or bi-weekly if you have the pumpkins.

Bleaching any environment or equipment in the coop is just not something I ever recommend, nor dusting the whole place with powders of any kind – including Diatomaceous earth (DE).  All that does is kill everything... unfortunately it also kills all the beneficial bacteria, yeasts, good microbes and other organisms that keep a healthy balance in their environment.  Doubly unfortunate, the bad guys grow and populate that now empty slate much quicker than the good guys and then they rule once again.  This necessitates repeated bleachings and poisonings and so the cycle goes round and round, where it stops nobody knows.

Diatomaceous earth (DE) just kills all the goodies in the soil.  Not a good thing to do… ever.

Start a deep litter going in your coop (see the Deep Litter tab at the top of the page)...  I know you said you have pine shavings but deep litter is a little different than just having deep shavings in the coop that you keep raking out.  Leave that poop and work it into the litter and keep building on that.  Contrary to theories that deep litter is a hiding place for mites and lice and will promote their life, it is also a hiding place for those creatures that prey on their larvae.  Yes, even parasites have parasites.  Make a good home for the parasites of the parasites and you won't have a good home for the parasites.  I hope that wasn't too confusing.

A good deep litter system is a healthy way to help chickens who need good bacteria in their lives, as the deep litter is just a petri dish for the growth of beneficial microorganism.

So... to recap, good fermented feed to populate their insides with good bacteria and deep litter to grow good bacteria in the coop environment.  These are long term fixes that, when nurtured and developed, will keep your flock from getting these bad things instead of trying to treat for them once they have been gotten.

For fast relief of the current problems, place NuStock on those nits at the base of the feathers, on the skin of their face and ears, and dust these chickens thoroughly with wood ashes.  Not Diatomaceous earth (DE).  Wood ashes worked lovingly and deeply under the feathers and into the skin.  Then set up a good dusting area of the same.  You can even place the ashes in the nesting box.

Speaking of the nesting box... get rid of straw.  Hay - yes, straw - no.  Straw has lovely little tubes where bad boys like to hide and live until they can come out at night and bite someone.  You can use hay or pine shavings for the nest boxes and even place a little wood ash in there.

If the coop is too small for them to get into and out of cold weather, this is something I would change.  I assume CO has weather somewhat similar to where I live and though an open air coop system is nice for the ventilation, birds like to sleep somewhere a little more snug and out of the wind when cold weather blows.  If not, they will be using all the nutrition in their feeds to keep warm instead of for health and growth.  If your coop is too small for all your birds at once, change the situation... either eliminate some of the birds or construct a bigger coop space.

If eliminating, I'd start with your Buff Orpingtons and the Silkies... eating lots but not producing much.  In these economic times, it just isn't feasible to keep supporting non-producers. 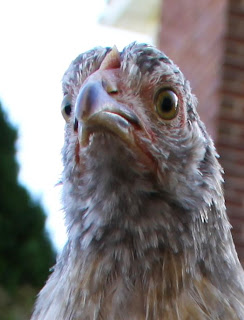