Got some pictures today.... keep in mind that these chickens looked much worse than this a week ago and now have a little more color in their combs and a little more feather growth...particularly the rooster.  He was missing feathers on his neck, around his eyes, under his wings, etc.  I know this roo and I know how he molts, so it wasn't just molting going on.  The lice and mites have made all their feathers pretty chewed looking.   I'll try to caption each pic... if you have any questions about what you are seeing, feel free to ask.  Only one BR out of the whole flock is laying...one lonely egg.

1.  This is the wild bunch out foraging today. 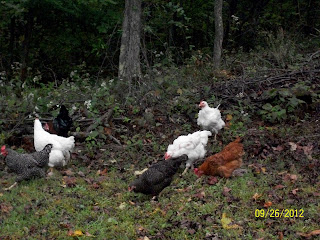 2.  This BA hen shows pale comb and dull feathering and, if you'll notice, she is very thin and you can just make out a prominent keel bone in this pic which also shows up the full crop.  I don't know how old this hen is but she didn't molt hard, so I'm thinking fairly young...is not laying. 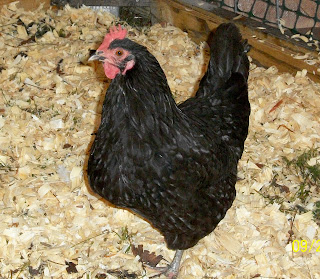 3.  This pic shows one of the WR, BA and BR...the combs are much more red than they were when they arrived but you can really see how poorly feathered the WR is in this pic.  All birds in the flock except one show a lot of wt. loss. 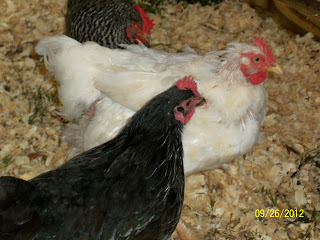 4. This pic shows the one fairly healthy looking WR in comparison to the worst looking one.  The PR in the background is also in pretty poor shape. 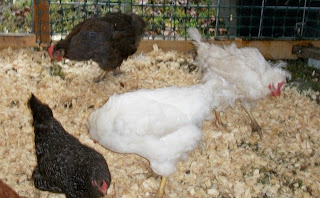 5.  This pic shows the feather loss, redness and swelling caused by the gleet and lice infestation. 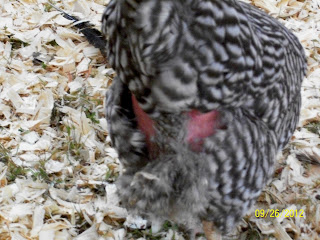 6.  This pic shows how rich a place these birds have to forage and they also have 3 acres of meadow that is completely surrounded with this kind of woodland. 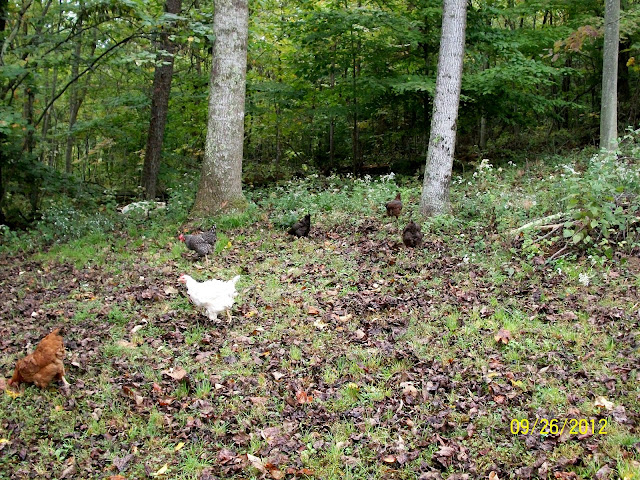 7.  This pic shows scale mite and swollen feet, along with redness and swelling due to gleet.  Also has a lot of feather loss and is malnourished. 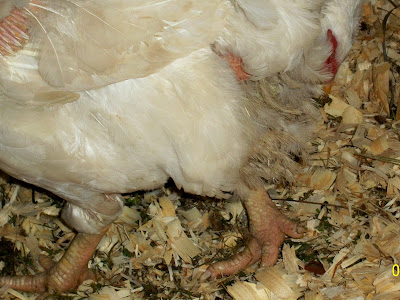 8.  In this pic you can really see how thin these birds are, even after being a week on FF and good forage.  All keel bones in this pic are prominent~which is why you can see the bulge of their crops so clearly...this is something that you should not see so well on healthy, conditioned birds~ and that rooster has lost about 5 lbs since I last saw him. 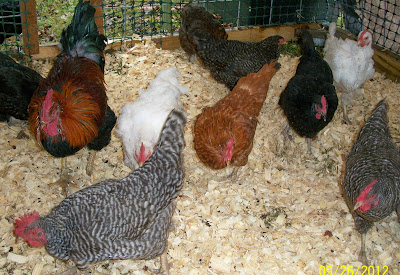 9.  This WR is horribly underweight, anemic, has gleet, scale mites and had lice when she arrived.  You can really see the keel bone on this one. 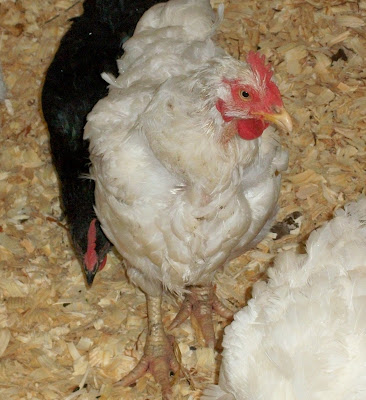 10.  .....and this is what she used to look like, only bigger and more sleek and with a red, rosy comb.  This is Moby Dick, my broody WR, and she is the only chicken that is heavy, sleek and half way normal in her appearance...and she is still underweight from what she used to be.  Not in fat, these WR are pure compact muscling folks.  She has lice, skin mites, scale mites and gleet...her gleet is probably the worst as she has enormous swelling above her vent. 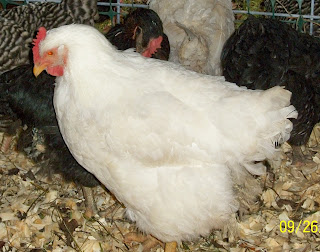 11.  This is the only New Hampshire left..there used to be five.  She is very underweight, anemic, has mites, scale mites and lice and displays dull, lusterless feathering.  Is not laying. 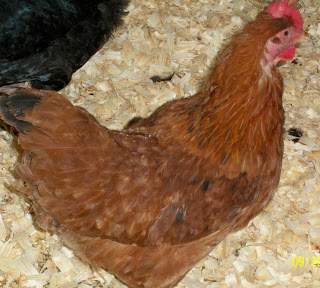 12.  This PR hen is only 3 yrs old.  She is pale, anemic, shows skin mite damage to feathers on face and had lice and mites when she arrived.  Believe it or not, she looks much better after one week than she did when she got here.  She is not laying.  She is also lacking the feathers or the strength to fly up to the very low roost, let alone the high roosts. 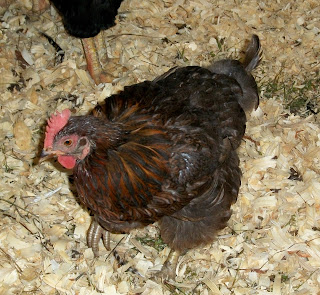 13.  Here's poor Raggedy Ann( her appearance fostered her new name).  I think I was more shocked about her than all the rest.  This, believe it or not, is a WR hen and used to be big, beautiful, and sleek.  She actually looks way better than she did when she arrived and she already shows more feather regrowth and more color in her comb, beak and legs.  When she first arrived her legs and beak were very pale.  She has all the parasites listed and is not laying.  I'm shocked that she can even get up on the roosts.  She's very spunky and fights for her roosting rights next to the rooster.  She is 6 yrs old and in all the years I've had her, I've never seen her molt more than a few feathers around the tail....now she looks like a wood chipper casualty. 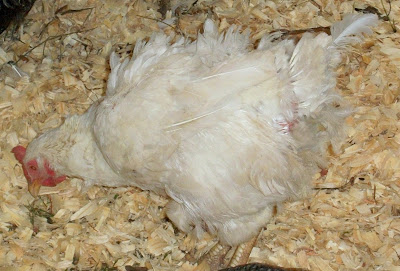 14.  This is the skinniest bird of all.  A young, unknown bird...maybe a Dom cross of some kind or just very poor Dom genetics?  Her keel bone is the most sharp and her comb was dead white/grey when she arrived.  She's looking a little better....very vigorous in her action, even though she is the most malnourished...might also be a very young bird that hasn't developed breasts yet, not sure. She is not laying. 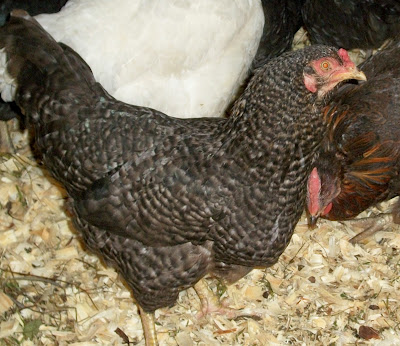 15.  This is my only Specked Sussex left.  She is very flighty, pale, and shows feather loss on her face due to skin mites.  She has dull feathering and eyes...but looks way better than when she arrived.  She is not laying and she is 3 yrs old. 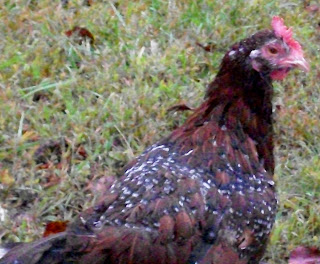 16.  The two heaviest, least malnourished birds, Toby and Moby Dick...but even they are very underweight compared to their usual condition. 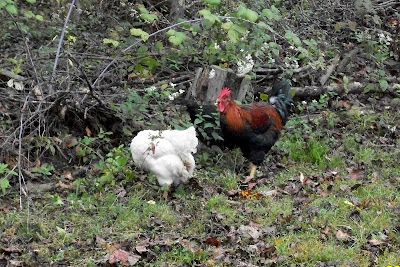 17.  Moby, Toby and Middle Sister WR( that is pale, shows feather loss and is very underweight).  Toby is much brighter in his feathering since he arrived and has had a lot of feather regrowth around his eyes and on his neck. 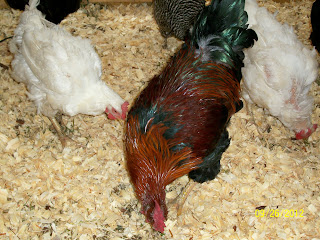 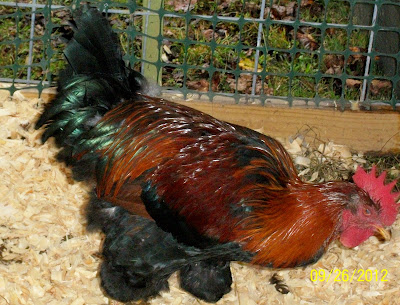 19.  Pics of gleet and swelling around vents. 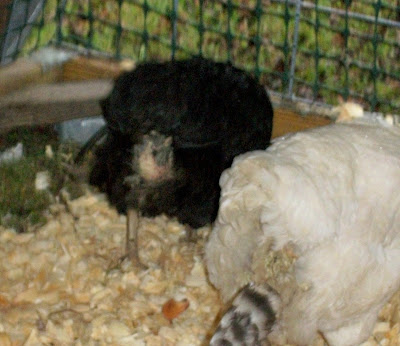 20.  Close up of the swelling...looks very painful but the birds don't flinch or struggle when it is palpated. 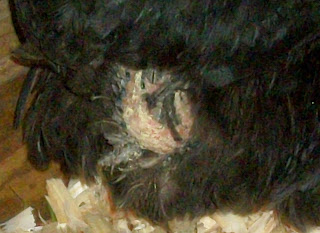