Chicken Keeping Food For Thought... And a Winner!

Every now and then, I’m going to infuse this blog with little bits and pieces from the perspective of a Chicken Newbie… (that would be me). I feel very lucky to have such a wonderful mentor in Bee – and some other “Old Timers” that we’ll be hearing from later on down the road.

You see, when I first became interested in keeping chickens, I wanted to do so for a number of reasons, not the least of which was to have my own source of organic, free range eggs.

Ironically, information junkie that I am, the more I read for the purposes of learning how to raise my own chickens, the more I learned about the use of chemicals and medications…

So… if I de-worm my chickens 4 times a year with chemical de-wormer, if I put antibiotics in their water at the first sign of a ruffled feather and if I rub my flock down with chemicals to treat or prevent mites and lice, how would I be eating organic eggs?

It was only by chance (or fate) that I happened to stumble upon an informational forum thread on a popular chicken website… and I found Bee and her no-nonsense, all natural wisdom. This was what I had been looking for all along! If I wanted to use chemicals and antibiotics, what would be the purpose in raising my own chickens? Why not just buy chemical and antibiotic-laden eggs at the store?

So how does this chicken newbie do things differently than she would have if she’s followed the most common advice out there? 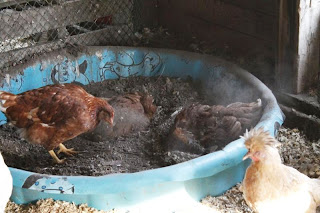 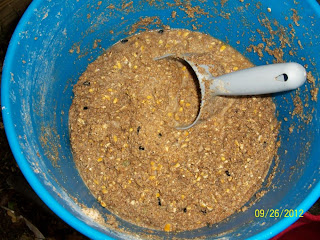 So there’s my perspective on some of what I have learned so far.

I often get eggs with blood on the shell and never considered it abnormal. Usually it is from pullets coming into lay or really big eggs like Bee said. :) 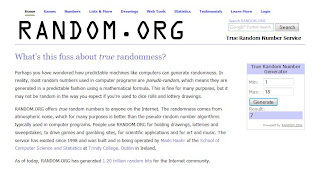 (And if you’re wondering, multiple comments by one person were counted as one, and MY posts don’t count. I also didn’t count those that were just a question about another comment.)

So congratulations, Aoxa! Please email me at shabbychicken@hotmail.com with your mailing address and your choice of keychains! 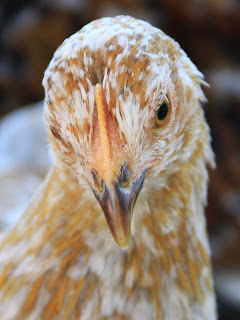