Well, the hay that the Bat brought home was moldy...bad moldy.  It was free, so one cannot complain..but the mold got Katy Chicken to wheezing and sneezing again, poor thing.

To economize and make do with what we have, I will be encasing these bales in heavy duty leaf bags and using them for insulation anyway.  It won't look as pretty but it gets the job done and will make the bales easy to clean, while still sealing in the mold and providing an insulator for this open air coop.

I found that I don't need as many bales to make this coop snug but will hold a few bales in reserve in case the cold gets more bitter this winter and I need more oomph in the coop.  I doubt I will....
Pics of Middle Sister, AKA Stumpy, and her now normal feet.  She was soaked with epsom salts for these impacted glands in her feet and resulting inflammation, 2 nights in a row, and the impaction was relieved some days before that.  I think the epsom salt soaks finally turned the tide for this chicken and she is now on the way to filling out and getting a better overall appearance and health.

From left to right on the three WR sisters:  Raggedy Ann(no longer raggedy), Middle Sister(no longer Stumpy) and Bertha AKA Moby Dick(the only one that looked like a chicken when this all started). 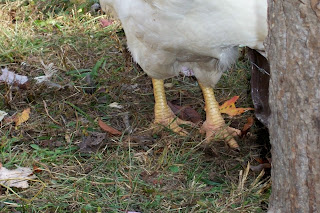 Middle Sister's feet...no longer puffy, swollen and tender...you can still see a residual redness but her scales are shiny, no more evidence of scale mites and the swelling is down. 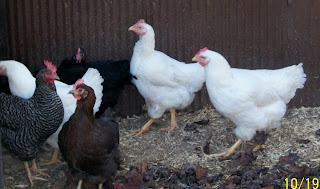 From this pic, it's almost hard to tell which hen is the Middle Sister now(she's the one in the middle, naturally)....look below to see what she looked like at  Week 1, a mere three weeks previous. 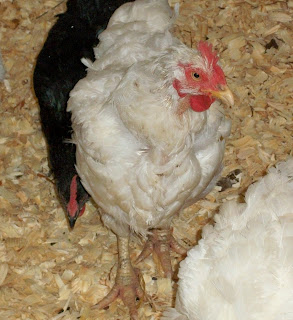 Pics of the new leaves added to the bedding today....and the chickens who love them.  I try to get leaves that are good and dry, after the dew has dried and the winds have done their job.  Then the open air coop will continue to let off humidity/moisture as these leaves dry out and deteriorate. 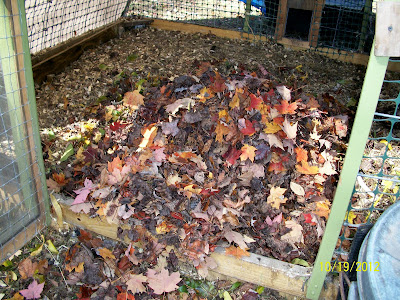 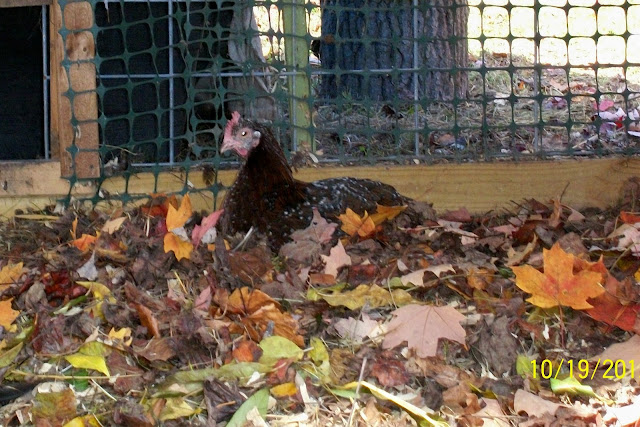 I have one more chicken that needs reconditioning and is not catching up with the others.  She is a little BA or a BA mutt that still looks pretty scraggly, dull feathered and kind of skinny.  She is the other chicken I found with enlarged and impacted glands in the feet, though not as bad as the WR, Middle Sister.  This bird doesn't have a name other than That Other Black Hen...we'll have to work on that.  She is not one of my original flock and I do not know her age, she is molting and she is not laying.  I'll try to get pics of her tomorrow to show her general condition right now.

For now, I think a good soak in the warm Epsom salts may make a difference in this bird's feet, maybe dig out any debris in those glands...it just may help her gain some ground.  It sure worked for Middle Sister.  When a creature is in discomfort, you can often see it in their general condition....they won't have a healthy, bright appearance and movement and they will stand out from the rest, if the rest of the flock are doing well.  That is what is happening with this little bird...she's the last one that seems to be needing some sheen and gloss to her feathers and some pep in her step.

After that one, I think they will all be out of the woods and moving towards good health for the winter.   Most of the legs are showing new, glossy scales ~ I don't know when they lost the old ones but there is new, lovely and supple scales now showing on most birds.  Toby still has some old scales to shed, Turkey has some and a few of the others but for the most part, most legs are new and pretty.  I'll try to get pics of the new legs/scales/feet soon.
Winterization of the coop is done for now. I'd like to add a few features to let in more light but will have to work on that a little.  This is a weird style of coop, so the tweakings are possible but not as easy as on a wooden coop.  I just feel like natural light is so important for winter as the birds will be in the coop more and need some sunshine.  This coop is pretty dark for my liking.

The coyotes are howling close again tonight and about in the same location.  They must have a kill down there that they are returning to and eating on.

Soaked a chicken's feet tonight and removed some stinky stuff out of the foot glands, applied more NuStock to the scales and massaged in some bag balm.  Miss Ruby got a butt check, a wash and some more NS applied to her vent.  Her vent looks great except for ulcers at the corners of her vent.  I applied bag balm to these as well.  She lays an enormous egg and this can't be helping the healing of those corners.  The gleet looks like it is gone and she is no longer swollen and prolapsed at all.