Y'all wanna see pics of The Bat I took today??  This is totally off topic of the thread but it will give you an idea of from whence I come......   She is dressed up here for a re-enactment at a local historic site that does fall tours of the Blennerhassett Island and mansion here locally~she is one of the servants in the show and does clogging around a bonfire.  Jake does no clogging whatsoever...he's more of a butt-sniffin' dog.  Dancin' is fer sissies. 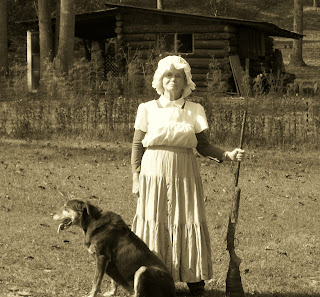 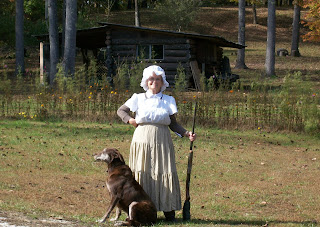 I made her try to look stern but she is incapable of pulling it off properly....in my great-granny's pics you could FEEL the burn of her gaze.

Gnarly Bunch Daily Update:  Two eggs today...one was from my Little Red Hen.  She is 6 yrs old and is laying nearly daily now, right in the middle of molt and natural slow down.  What a trooper!  She is the most inquisitive and friendly one of the bunch and is also Toby's fave...which also leaves the back of her head a little thin on feathers but she's holding in there.

Middle Sister's feet and ankles are definitely less swollen and inflamed in appearance today.  Not my imagination.  I really observed her today and watched her feet and her walking closely...it's really happening.  She is also looking more...I don't know how to describe it exactly but I guess she looks more at ease and active.  She even looks more smooth in her feathering and has a more upright stance.  No hunching when she stands.  I'll take pics soon so you all can see the difference.  She just might have missed the cull on this one.

I looked at Ruby's butt last night and noticed she was a little prolapsed...put some Preparation H on it and will check it tonight.  I think she has had to strain so much to get around all the swelling from the gleet.  She wasn't real prolapsed but did have the end of the cloaca visible in the vent and it was swollen and inflamed looking.  She has a very large egg, so I'm not surprised she has had some trauma there after all the tenderness from the gleet.

Funny thing is that this chicken looks the most healthy and beautiful of all the hens and I just don't know how when you think of what she has been through.  But she just gleams in the sunlight and her comb is so red now... she sure is a pretty hen.

Actually, these birds have been laying real steady for all this time until at the end of this summer... which is normal slow down for molt.  The folks that had them reported getting "buckets" of eggs..and I believe them ~ this is a well-honed flock of layers that I spent a long time developing.   They had cartons upon cartons of eggs in their spare fridge and said they couldn't use them all...knowing what condition the birds were in I can't imagine how anyone would want an egg that came out of them.

It remains to be seen if they will snap out of this slump of molt, considering what has been done to their systems.  These birds are pretty old to be laying steady anyway, though I've had 7 year olds in my flocks that laid steady too.  I always plan and cull for egg laying and laying longevity... I don't like having to replace hens all the time.  Just when you get to know your flock you'd have to get all new ones.  Just not my thing... I like the old tried and true gals.