A true story - Written by Bee


I am going to try an experiment.  Something I've never done or attempted before but I feel that by sharing this experience, it would be educational and beneficial to those who have let their flocks stray off the path of good health and want to find the way back.

Here's the back story:  I had a wonderful flock that had been raised all naturally, were free ranged and had been culled vigorously for laying, hardiness, feed thrift, broodiness and mothering instincts.  They were gloriously healthy, productive and beautiful to behold!  There were 28 hens and one rooster, a Partridge Rock named Tobias, or Toby.  He was regal, quiet, gentle and wise.  The hens were quiet, peaceful and never squabbled or had discord.  I had 5 White Rocks, 5 New Hampshires, 5 Barred Rock, 5 Speckled Sussex, 5 Partridge Rocks,  3 Black Austrolorps.  The White Rocks and New Hamps are 6 yrs old and the Black Aussies are 7 years old, the SS, PR, BR are all 3 years old.

I needed to travel and I didn't know how long it would take, so I sort of gave/farmed out my flock to two different farms.  Ten of them went to a beautiful farm high on a mountain where they free range and have a lovely life.  All are still alive and doing lovely, producing at max and living the good life.

Eighteen of them went to another mountain farm where the people said they would arrange free ranging areas and would try to raise them as I have done.

Long story shorter, they did not do this.  I checked on them now and again before I traveled and both flocks were doing fine...but the one that was confined to a coop (no run!) was showing signs of stress and were losing their gloss and healthy appearance.  I tried to ignore the guilty feelings inside and checked on the flocks by phone...reports were good, buckets of eggs were being harvested, etc.

I finally got to settle down to one spot and started thinking about my old flock and hearing rumors on the wind of the confined flock and their condition.  I stopped by there today and rescued the survivors of incredibly horrible management of my poor flock....only 10 were left and I even snagged a few that weren't originally mine and pulled them out of the pits of despair.  The other 8 birds have died from the poor care they have received.  In a year and a half, they managed to kill nearly half of the birds and have sickened the rest.

Yes, it sounds melodramatic but you would have cried if you saw them.  Crusty old me got sick to my stomach and couldn't stop tearing up all the way home.  My first instinct was to get them home and kill all those who were obviously suffering or showed signs of weakness ~ that would have been all of the birds.

Then I got to thinking that I would try to see if my natural flock management could restore these birds to their former glory and health.  They are old friends and though it goes against my usual strict "no sentimentality" rule, I feel I owe it to this flock for leaving them with nice people..... who used bad, bad, bad flock management skills.  Ordinarily I would cull these birds, but since I knew this was caused by poor management and not due to sickly genetics, I'm going to try to use all natural means to restore them to health.

From the initial assessment I have found:  Lice, mites, scale mites, (vent) gleet, possible (very likely) intestinal parasite infestation, excessive feather loss and damage, overgrown toenails, bare skin with redness, swelling and scaling.  I've found a few birds with swollen abdomens.  Almost all of them are severely anemic...I'm talking white beaks, legs, wattles, facial skin, vents.  They have low energy, weakness, dull and listless eyes, diarrhea and a hunched stance when they stand and little enthusiasm when presented with food and fresh vegetables.  Several are in severe molt and are attempting feather regrowth.  Almost all of them show malnourishment, though I know they were fed well...all keel bones are prominent and only one of the hens has her normal weight and feathering that they would have at this time of the year.

Unfortunately, there are no quick fixes for these things and just giving meds will mean that, eventually, you will just have to give more meds to keep them at optimal health.  I'd like to show folks how to start out with the very worst and get them back to the best without the use of quick fixes.

I apologize at the poor quality and detail in the photos as my mother (AKA: The Bat) was taking them and she isn't real familiar with the camera.

I know you can't see her well covered with all those wood ashes, but this used to be a plump, sleek White Rock hen that weighed at least 10 lbs.  Now she would be lucky to go 6 lbs.  She is missing or regrowing most of her feathers, has lice, mites, gleet and scale mites. 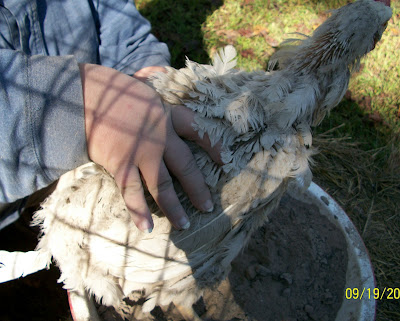 This is a New Hampshire hen that used to weight approx. 8 lbs and now weighs about 5 lbs.  As you can see, her comb is pale and she is pretty listless.  She has lice, mites, and scale mites along with gleet. 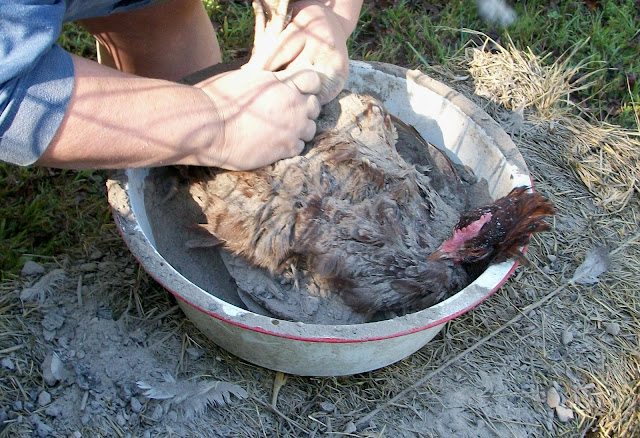 This is a close up of gleet and scale mites on one of the White Rocks.  You really can't see the detail of the gleet in this but it has very tight, large beads of crust close to the base of these feathers that cannot be dislodged by hand and simply must be cut off...this is difficult because they are very tight to the skin and the possibility of cutting the hen is a danger. 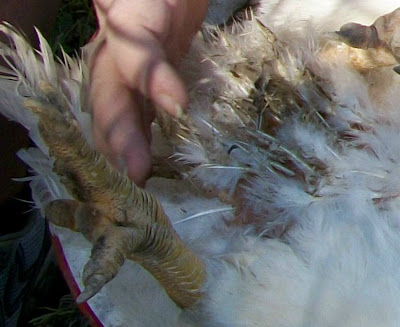 Another White Rock with lice, scale mites and gleet and much feather loss.  If you will look at the feet you can see the swelling caused by scale mites.  Also note the pale legs from anemia of these parasite infested birds. 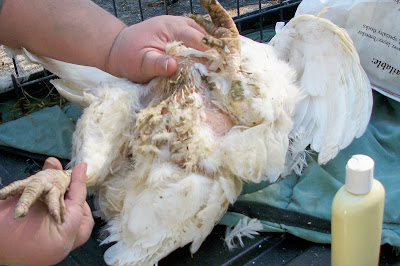 In this pic you can see a close up (sorry about the lack of sharpness) of the scale mite damage to the feet and the pale skin caused by anemia from parasite infestation. 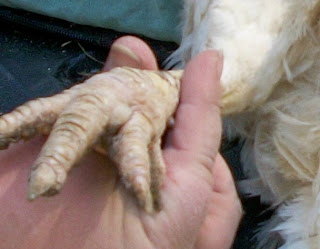 In this pic, Toby, the rooster, is getting dusted.  Note the pale comb and wattles and dull eyes.  He used to weigh a good 13 lbs but now only weighs about 8 lbs.  He has feather loss around the head and eyes and is infested with lice and mites, with scale mites on his legs.  In the old days, he was much too big to fit in this pan...now he has lost so much mass that his keel bone is prominent. 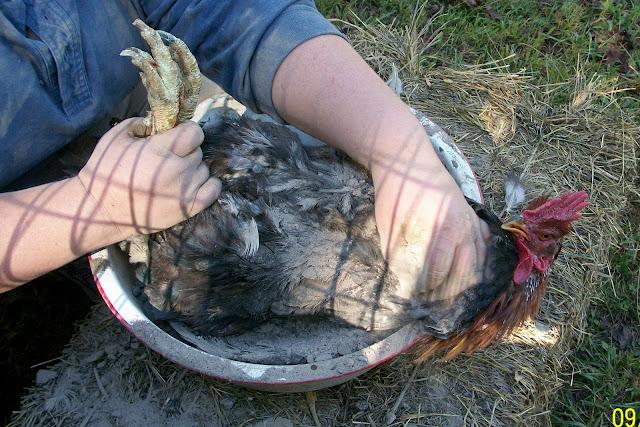