Crossing the Road - The Adventure of Lucille the Chicken (Part VI)

Crossing the Road - The Adventure of Lucille the Chicken
(Part VI)

Talk about a cliff hanger!! It has been almost exactly SIX MONTHS since we last saw poor Lucille trying to find her way back home after being carried off by a hungry hawk!

Wet and bedraggled, Lucille searched for a safe place to roost for the night. Much to her luck, she found a wild, evergreen magnolia tree. The big, green leaves would help to hide her from the wide array of hungry nocturnal hunters she knew were already starting to prowl for the evening.

Approaching the base of the mature tree, Lucille found that the first branch was more than 4 feet off the ground. She leapt, flapping as hard as she could, but fell short. Her right side started throbbing again. Newly formed scabs cracked with her effort and began to sting. Again and again she tried to reach that branch, but she simply couldn't do it.

Then, off to the side, Lucille noticed a large outcropping. She felt her way carefully up the side of the outcropping and from the highest point, jumped and flapped again. This time her toes just barely caught part of the branch. Flapping as hard as she could with her good wing, Lucile scrabbled up onto the branch and stood shivering in the darkness. 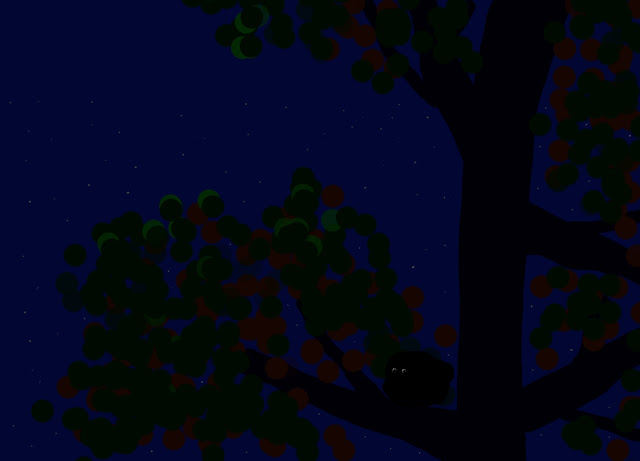 The moon was almost hidden and the night was dark with the exception of some stars high up in the vast, blackened sky. Water still dripped from the pullet's underside and the mud clinging to her soft feathers became increasingly clumpy and hard. She settled down on her magnolia perch and started to tuck her head behind her left wing, but found this position put too much stress on her injuries. Sighing softly to herself, she relented and tucked her head behind her right wing instead. She could smell the dried blood and the pungent scent of wet feathers, yet she Lucille was simply too exhausted to care.

In the morning, tendrils of mist shrouded the sun and the wind blew ghostly shapes between the trees. Lucille did not relish the idea of starting the day's journey in the mist. It would be too easy for a fox or coyote to sneak up unseen. She sat patently as the sun slowly warmed the earth and invisibly drew the grounded clouds back into the sky.

Looking about cautiously, Lucille emerged from the large magnolia, hopped back to the outcropping and made her way back to the stream.

The hours passed as Lucille continued toward where she believed her home was. Step by step, eyes on the sky, the pullet was careful to stay within a short distance from the underbrush where she could quickly hide if she needed to. All the while she had the innate sense that home was slowly growing closer and closer.

After briefly diving into the underbrush when she heard a noise, Lucille emerged when she heard a rooster's crow... and it was CLOSE! Ducking under a piece of barbed wire fence, Lucille saw her home! And it was just across the stream. The wide, full, cold, rushing stream.

For an hour the pullet paced up and down the stream looking for an easier crossing - a fallen tree to use as a bridge or some rocks she might use to traverse the water - but there were no bridges in sight and the recent rains had filled the wide mountain waterway, making it rush and froth over its slippery stone path. Finally the little chicken made a big decision. She was going to have to fly! The idea terrified her. It was only last night that she couldn't get up to a branch just four feet off the ground, and now she was going to try to fly over a stream that was no less than 10 feet across?

But she had to try!

And try she did. Getting a running start, she ignored the pain and flapped her wings as hard as she possibly could. She reached the edge of the bank and leapt with all her might. Using every last bit of her energy and will, she made funny, squeaky chicken sounds with each downward beat of her wings. And there she was... sailing across the rushing stream... 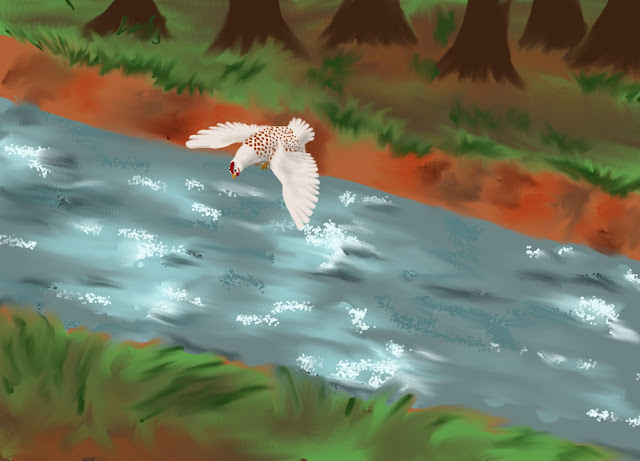 And sail she did! She hit the damp, red clay of the opposite bank with a soft "thud," and quickly scrambled up the side to the flat, mossy area at the top where she flopped down, panting. By now, every inch of her little chicken body ached from her injuries, her long trip and her leap of faith... but here she was... just yards away from where she had been foraging when the hawk took her days before.

It was evening and the other birds were starting to settle in for the night.

Famished and thirsty, Lucille made her way to the waterer where she gulped down fresh water for what seemed like forever. It was there that the human person cartaker-thing found her. 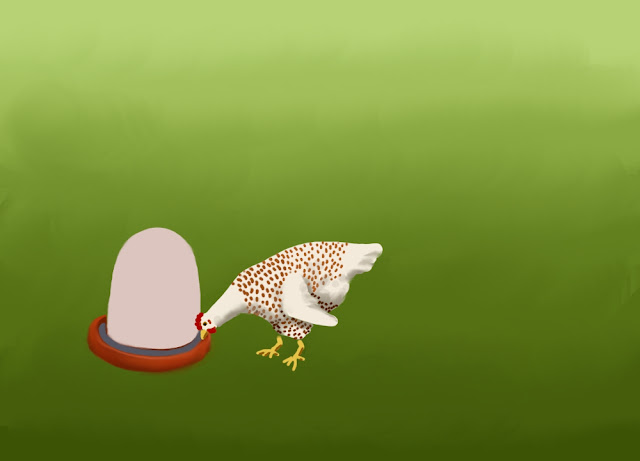 When Lucille had finished drinking, the human scooped her up gently and took her in the house. Lucille was given a warm bath. The mud was gently washed from her feathers and her wounds were flushed with clean water. The human wrapped her in a soft towel and used a noisy machine to blow warm air on her to help her dry. Then medicine was applied to each puncture wound.

Finally, Lucille was placed in a clean cage bedded with fresh pine shavings... which is where she slept deeply and somewhat comfortably for the first time in 3 days.

Posted by Bulldogma at 7:30 AM