Crossing the Road - The Adventure of Lucille the Chicken (Part IV)

How would she get across this space without attracting the attention of another hungry raptor. What if there were dogs? Or coyotes? Or foxes? The mountains were filled with predators of every kind who would love a fresh chicken dinner!

Crossing the Road - The Adventure of Lucille the Chicken (Part IV)

Lucille gazed out over the pasture wondering how she could safely get to the other side. She knew that with her injuries she would not be able to outrun a predator, and that as a white chicken, she would be easily spotted out in the wide-open space. 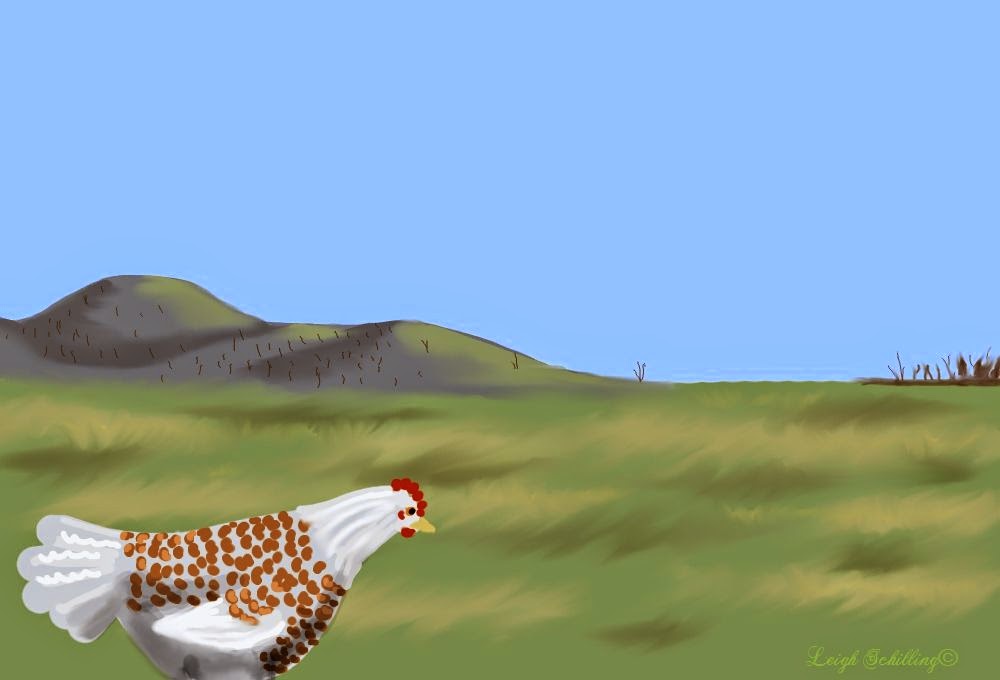 Feeling homesick and frightened, the small chicken retreated back into the edge of the forest and climbed into the branches of an evergreen where she knew that though she would not be fully safe, she would at least be well hidden as the night set in.

As the world darkened around her, the many nighttime sounds Lucille had been familiar with her entire, short life now seemed dangerous and frightening. That snapping twig? Could it be a raccoon? The hooting of an owl? How close was it? As badly as she longed to sleep, Lucille found herself jumping at the slightest noise. 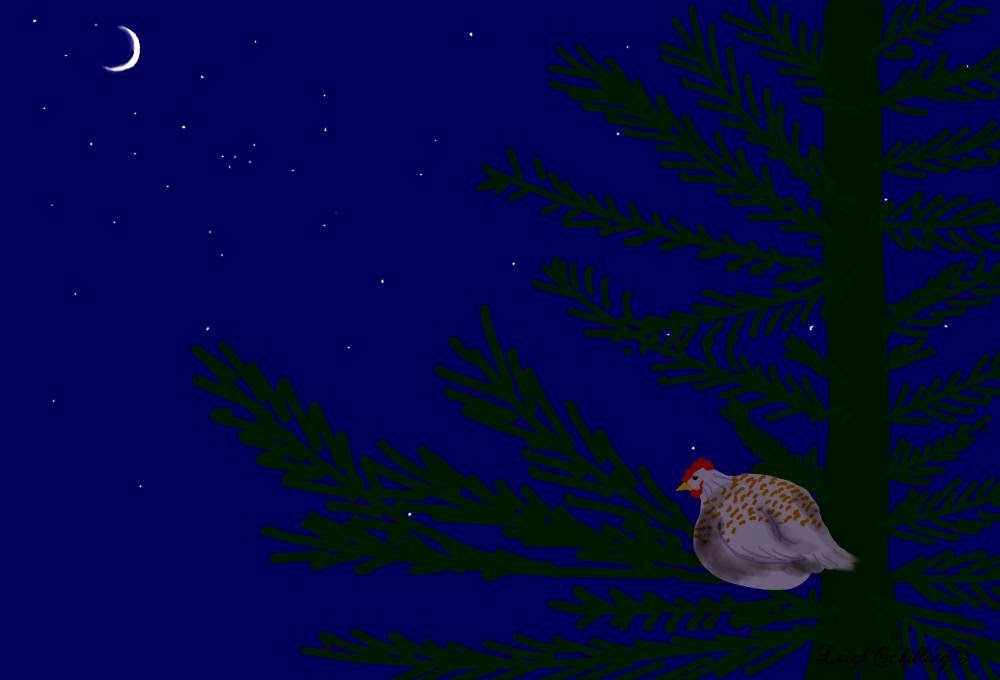 At long last she could hold her eyes open no more and she surrendered herself to exhaustion.

Lucille did not know if she had slept a few minutes or a few hours, but a sharp crackling in the underbrush awakened her. The earth bathed in an inky blackness. The tiniest sliver of a moon hung in the night sky and Lucille knew that in only 2 more nights the moon would also be dark.

Chickens do not see well in the dark, and try as she would, Lucille could not see what had made the noise so close by. Her other senses heightened as the fog of sleep left her brain. There was a smell... and more noise. The feathers on the back of Lucille's neck tingled and buzzed as if some unseen electrical current caressed them in the dark.

The sound grew closer. The sound of four feet as they carried some dark animal through the forest... so... close.

Lucille froze, too frightened to even breathe. The footsteps stopped right next to the very tree in which she was hiding.
Heat...
What ever it was, it was so close to her that Lucille could feel the subtle heat that emanated from its body.
What if it could feel her body heat too?
What if it smelled her fear?

Without warning a nose came through the branches! Terrified, Lucille pecked it hard, only to be met with a surprised bleat. The young deer dashed off into the forest, and once again the night was quiet. 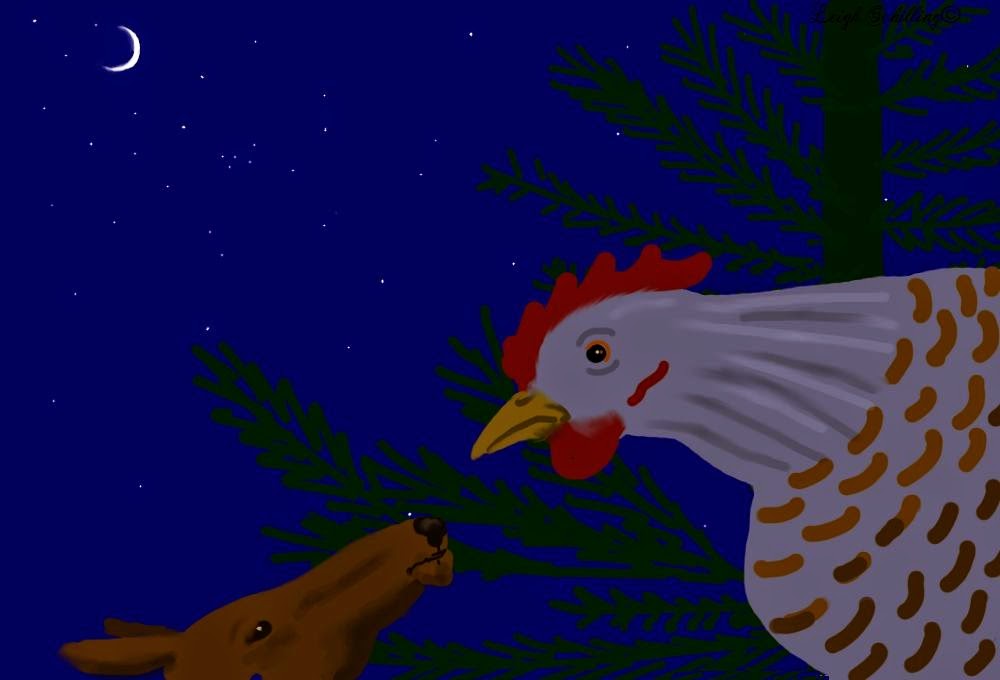 Lucille woke as the sun rose. She slowly hopped down through the low branches of the evergreen, bruises aching as she made the last short jump to the ground. She would be no faster today than she was the day before. As much as she despised the idea, Lucille knew she would have to stay in the forest and go around the large pasture.

Once again Lucille traveled through the underbrush. She could see the pasture to her left but it was imperative that she remain as well hidden as possible. She stayed alert for predators and more than once froze in her tracks as a shadow passed overhead or a sound came from deeper within the forest.

Step by step, foot by foot, yard by yard, Lucille grew slowly closer to her home. Now and again she thought she could hear a rooster's crow on the wind.
The wind...
The wind was picking up and the trees were swaying and restless above her. The sound seemed to grow louder and louder. 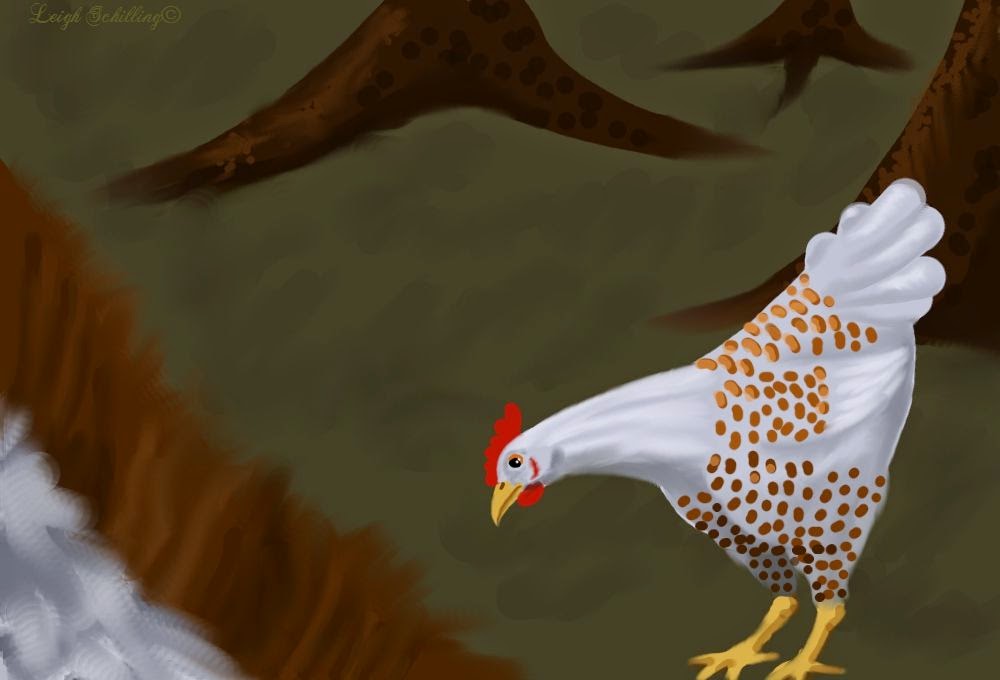