Crossing the Road - The Adventure of Lucille the Chicken (Part V)

Crossing the Road - The Adventure of Lucille the Chicken
(Part V)


The river was very wide and deep. The water churned white as it rushed over jagged rocks and multiple pieces of debris sped down the river as if they were racing each other to some unseen finish line. Lucille knew there would be no way she could safely cross... at least not here.

Lucille began following the winding river, stopping here and there to gobble up a bug or wiggling grub. Luckily there was plenty of underbrush to hide her as she went.

Movement caught her eye. A small field mouse scurried by with a small nut in its mouth. Fighting through the pain, Lucille took up the chase and was able to hobble quickly enough to grab the small rodent before it disappeared into a small hole in the ground. She was so very hungry and the protein would certainly help her tired, aching body! 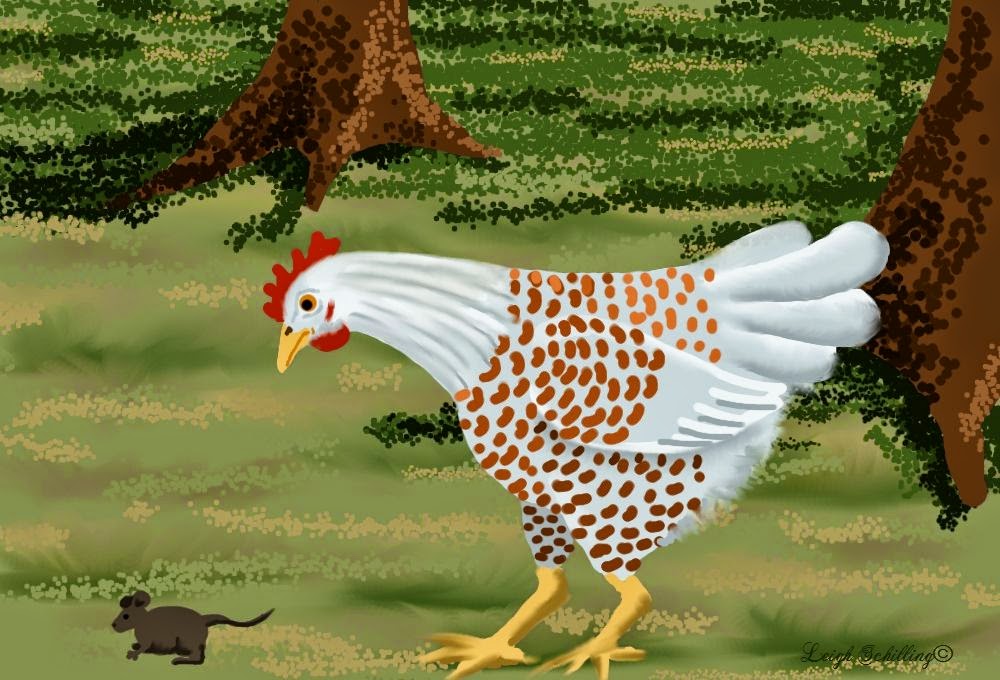 Continuing on her way, Lucille watched for some way to traverse the deep, swift river. After a while, a tributary stream crossed her path. It was nowhere the depth or width of the river, yet it still posed a bit of a dilemma. Now Lucille was forced to turn and wander up the tributary stream looking for a place to cross.

After not too long, Lucille found a place where the soft mud of the bank had caved in a bit, providing what almost seemed to be a ramp down to the stream's edge. Very carefully Lucille picked her way down, feet sinking into the cold, wet earth. Just as she had almost reached the water's edge, the mud suddenly became very slick and she slipped, sliding down into the water on her haunches. 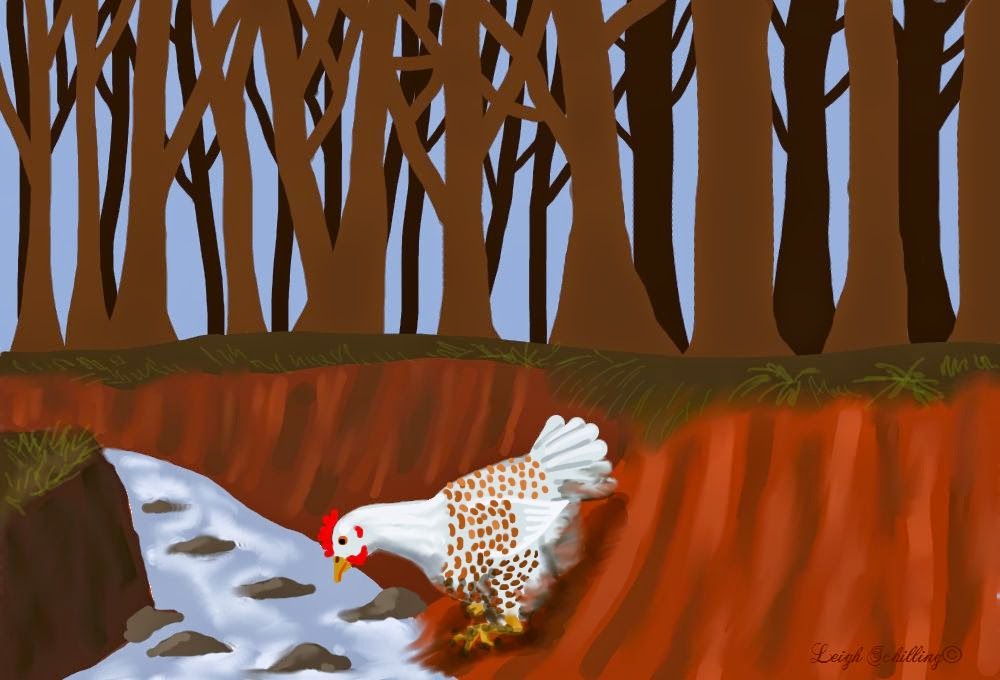 Mud clung to the soft fluff under her tail feathers in heavy clumps. The puncture wounds on her chest stung in the icy water. Lucille scrambled backward out of the water, her feet and legs sinking into the soft mud of the bank. Cold, wet and muddy, the little bird looked about and spotted an area where river rocks peeked out above the rushing water of the stream. With the mud sucking at her feet, Lucille slowly made her way to the spot across a short distance of water to the first rock. It took more effort to jump to the rock than in normally might have with the heavy layer of mud stuck in her feathers and her wet chest feathers weighing her down, but Lucille was determined.

There were two choices for her next jump and Lucille selected the rock that looked like the safest choice. From rock to rock, Lucille slowly made her way across the stream and scrambled up the bank on the other side.

The going had been slow, and already the sun was sinking down toward the mountain peaks once again. It would be dark soon, and Lucille needed to find a safe place to sleep. Tonight would be even darker than the last with almost no moon to speak of.


(Stay tuned for Part V of the story, coming soon!)

Posted by Bulldogma at 3:25 PM