How to Help a Chicken with Frostbite


You know? I didn't think it could happen to any chickens in my own flock. But it did, and it took my by surprise... suddenly I found myself with a chicken with frostbite. The tips of her comb were all blackened! How did this happen?


In general, frostbite affects chickens that live in poorly ventilated coops. Read more about this here: Winter Chickens – Mother Nature Versus the Coop. In short, moisture can't escape from a coop without good roof/ceiling vents and with nowhere else to go, the moisture condenses on the warm comb and wattles of your chickens. This moisture then freezes and causes frostbite...

But this particular chicken roosts in a very well ventilated hoop coop every night. How did she end up with frostbite?

I took her inside and used a warm, wet compress on her comb. Nothing fancy - just a paper towel soaked in warm (but not hot) water. Hot water on a frozen area can be very painful and can injure the tissue.

I was cautious not to rub the damaged tissue. Rubbing an area with frostbite can cause further tissue damage and invite infection. But even without rubbing, the wet paper towel came away with blood on it.

Upon further inspection under a bright light, it became evident that this pullet's comb had been cut during breeding. (I have a roo that likes to grab the girls by the comb when he mounts). Combs can bleed quite a bit. Apparently this poor pullet was still bleeding when she went to roost, and that blood froze over night when the temperatures dropped well below freezing.

After soaking the affected area, I slathered her comb with Nu-Stock ointment which has a base of pine tar. Because of the nature of frostbite, water-based or water-soluble cremes should not be used as they can freeze and make matters worse. Oil, wax or petroleum-based products will work best. I have also heard that extra-virgin coconut oil is wonderful for this kind of injury. Avoid mentholated oils or products with eucalyptus as they could potentially be very painful on frostbitten areas. 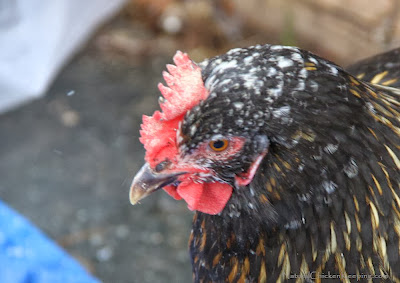 I waited until outside temperatures had risen above freezing before putting her back outside. Those who live in colder climates may not see temperatures over the freezing mark for days at a time, so wait until you are sure the chicken is on the mend and there are no wet or damp areas anywhere on the chicken prior to putting it outside again.

Unless it has a particularly severe case of frostbite, it is best to get the chicken back outside sooner rather than later - you don't want it becoming too accustom to warmer temperatures or you could end up with more problems when you do try to put it back outside a few days later.

Happily, by the next day her comb looked much, much better! I had been worried she would lose much of her comb because of the amount of discoloration I had initially seen, but it turns out the discoloration was mostly dried/frozen blood. 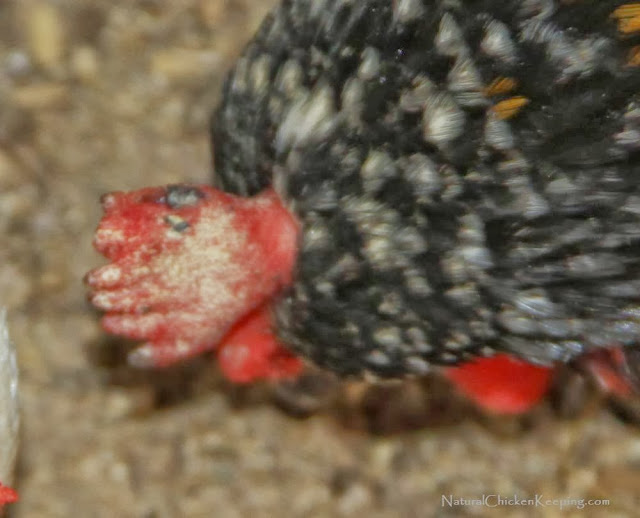 Frostbite Treatment Summary:
My dear friend (and NCK contributor) Justine lives in a far colder climate than I. Because of a well constructed coop, she has had almost no issues with frostbite... but she did have a lovely pullet by the name of Margaret that fell into the duck's water on a very, very cold day. Although Justine pulled her out of the water right away, the poor pullet's feet froze solid almost instantly.

You can see Margaret's story here:

Justine shared a heart-wrenching article that will make you think twice about heating your coop or barn. I urge you to read it here: Fire Safety in your Chicken Coop & Barn

Aside from poorly ventilated coops or random accidents like a bloody comb or an accidental mid-winter bath, frostbite should not be a big concern for most chicken keepers. Most chicken breeds are well suited to cold weather. They tend to nestle down over their feet when they sleep to keep them warm under their feathers and they tuck their heads under their wings to protect their comb and wattles. Tucking their heads under their wings serves another purpose too as it spreads the naturally occurring oils from their feathers onto their fleshy wattles and combs. These oils help to naturally protect the tissues and prevent frostbite.

And if you are seeing frostbite in your flock, please check the amount of ventilation present in your coop!

Wishing everybody a happy and healthy Thanksgiving!

(Please see the top, left sidebar for a quick link to our NCK 2014 Calendars!)