Raising Ducklings and Chicks Together & Aspergillosis in Chickens

Yesterday as my husband and I were working on a new run for our young flock of guinea fowl, my phone rang. It was my dear friend Linda. She was in tears and she needed me to walk her through her first necropsy over the phone. Over the next hour, Linda and I were able to solve a mystery and offer Linda some peace of mind for the health of the rest of her flock.

Let me start with some background...

Linda keeps her chickens and other livestock as organically as possible and recently decided that she should get some young chickens as her current flock is aging. Most of us might assume that Lida's birds might perhaps be 4 or 5 years old. Maybe even a little older. Well... Linda's oldest flock members are currently 13 years old! (No - that's not a typo.) And she even has the receipts from the purchase of those chickens to prove it!


In early May after doing plenty of research into what breed she wanted to add to her flock, Linda purchased chicks from two sources. Source #1 sent photos of the available chicks. In the photos, the chicks were in a rather damp-looking brooder with some ducklings of a similar age. Linda was concerned about the living conditions of the chicks, but giving the seller the benefit of the doubt, assumed that these conditions were likely the exception and not the norm.

The chicks were shipped and unfortunately USPS misplaced them... thus they arrived a day later than they were supposed to. When they arrived, they were tired and a couple of the chicks were noticeably lethargic, but Linda believed this was due to shipping stress. 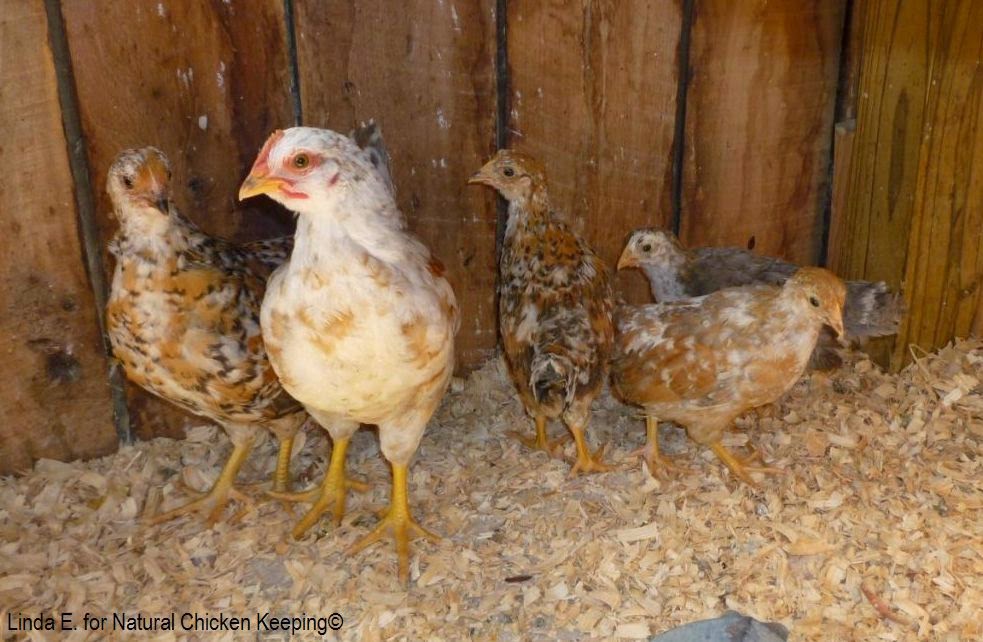 Chicks from Source #1 after arriving at Linda's farm

Over the next 6 weeks Linda watched the chicks from Source #2 grow big and healthy, but some of the younger chicks - those from Source #1 that had been pictured in a damp brooder with ducklings, didn't seem to be growing as well. And they were thinner... their breast bones protruded. Yet still there were no other symptoms. The chicks were all kept together, eating the same food and ranging in the same outdoor pen during the day.

Then just a couple weeks ago when Linda went out to the coop, she noticed that one of the chicks from Source #1 was breathing in a labored fashion. It was a hot day, yet none of the other chicks were breathing like this one chick. There was no hint of congestion or upper respiratory problems. There was no discharge from the eyes or nose and there was no noticeable sound that would indicate there was any mucous in the windpipe. Just the labored breathing. 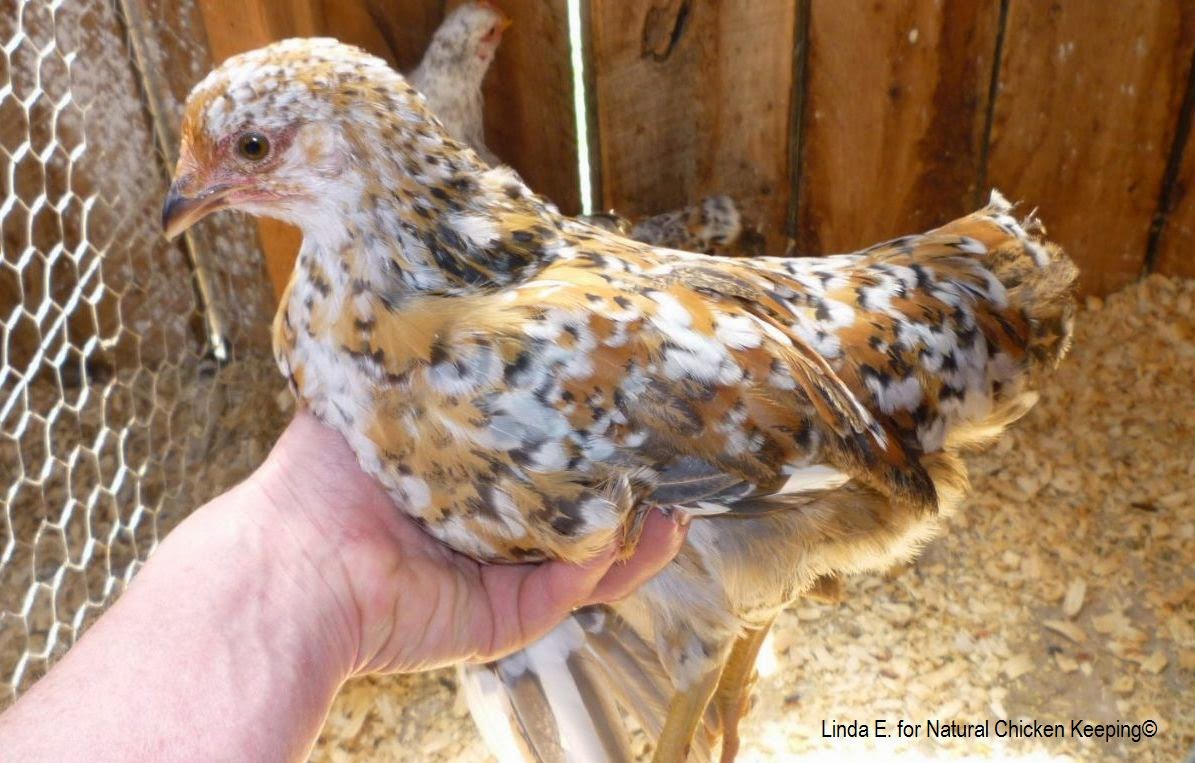 Within a few days another of the chicks from Source #1 was showing signs of labored breathing also and the first chick was getting worse.

Needing to know if this was something that could wipe out the rest of her flock, Linda drove 90 minutes to a vet that had avian experience. If you have ever taken a chicken to the vet, you may not be surprised to learn that the vet indicated he didn't know what was wrong and quickly offered to euthanize the chick and send it to the state lab where it would cost Linda $500 to have tests run.

Hearing Linda's story, my first somewhat snarky thought was somewhere along the line of, "Helllloooooo - I brought my chicken to you to make her better... not to make her worse... or dead..."
Linda was a lot more polite than I might have been.

Without the answers she had hoped for, Linda drove back home. Two days later she found the pullet dead in the coop.

And that's when she called me.


I really have to give it to her! Linda held it together and did an amazing job throughout the entire necropsy. She did such an amazing job of describing to me what she saw that we were able to pinpoint the mystery illness before she even sent me the following photos.

She found nothing unusual about the upper respiratory or GI tract. Then she got to the body cavity where instantly she discovered a huge amount of yellowish fluid. Some of this fluid had formed large, congealed masses around the liver. 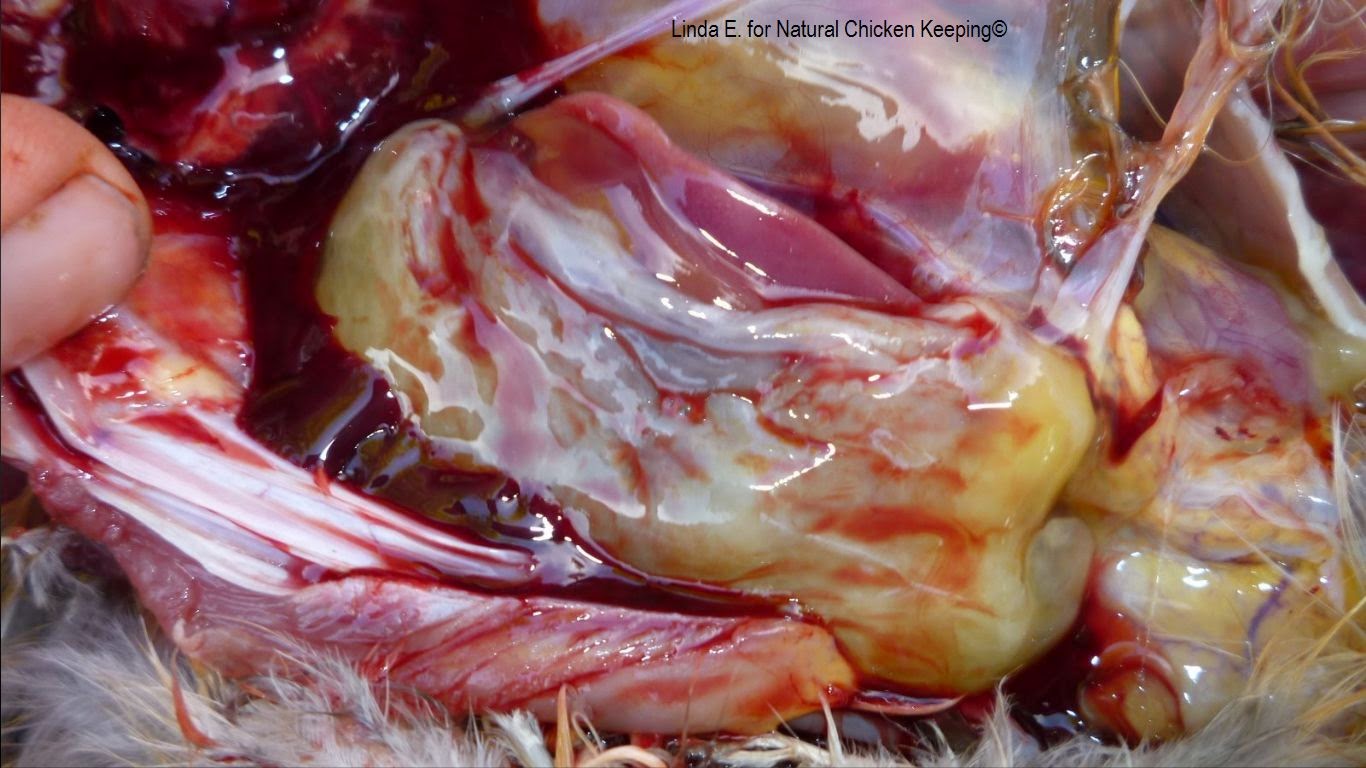 Congealed fluid masses around the liver. 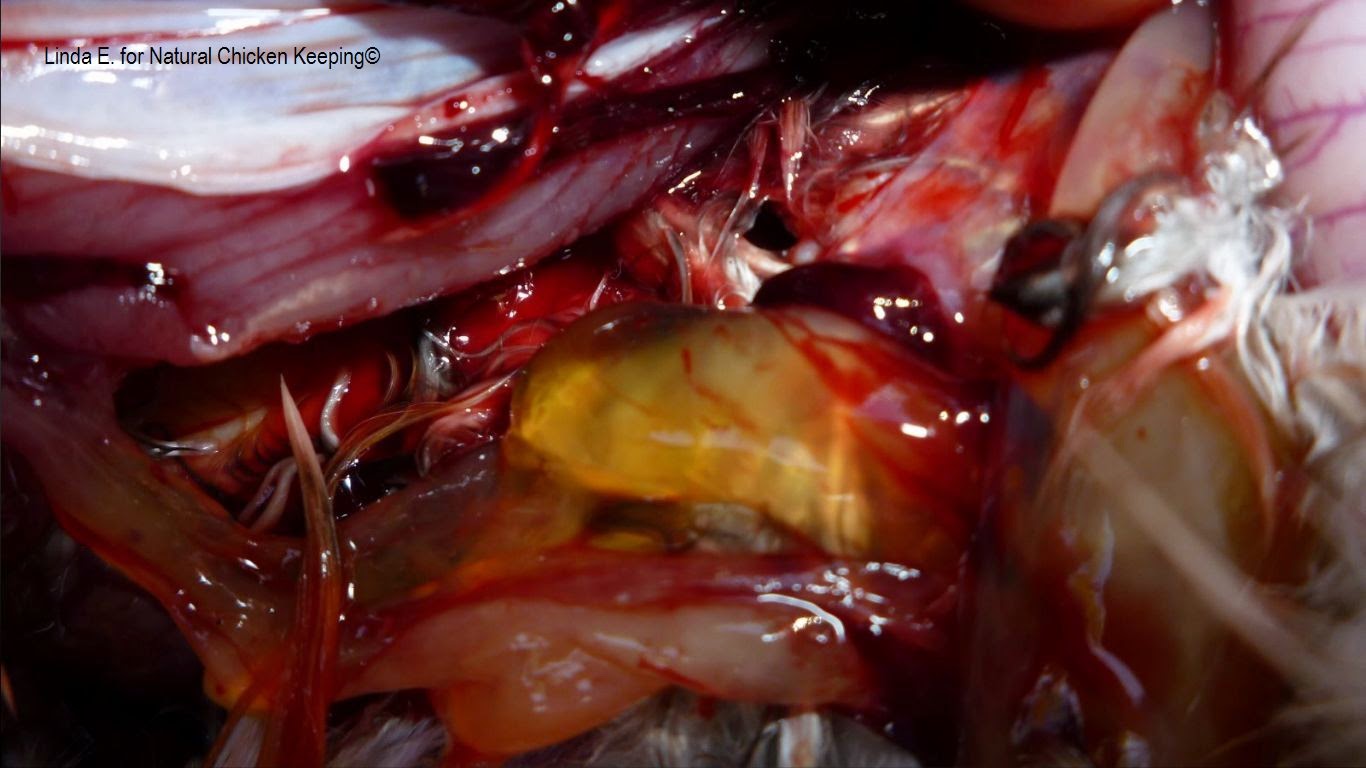 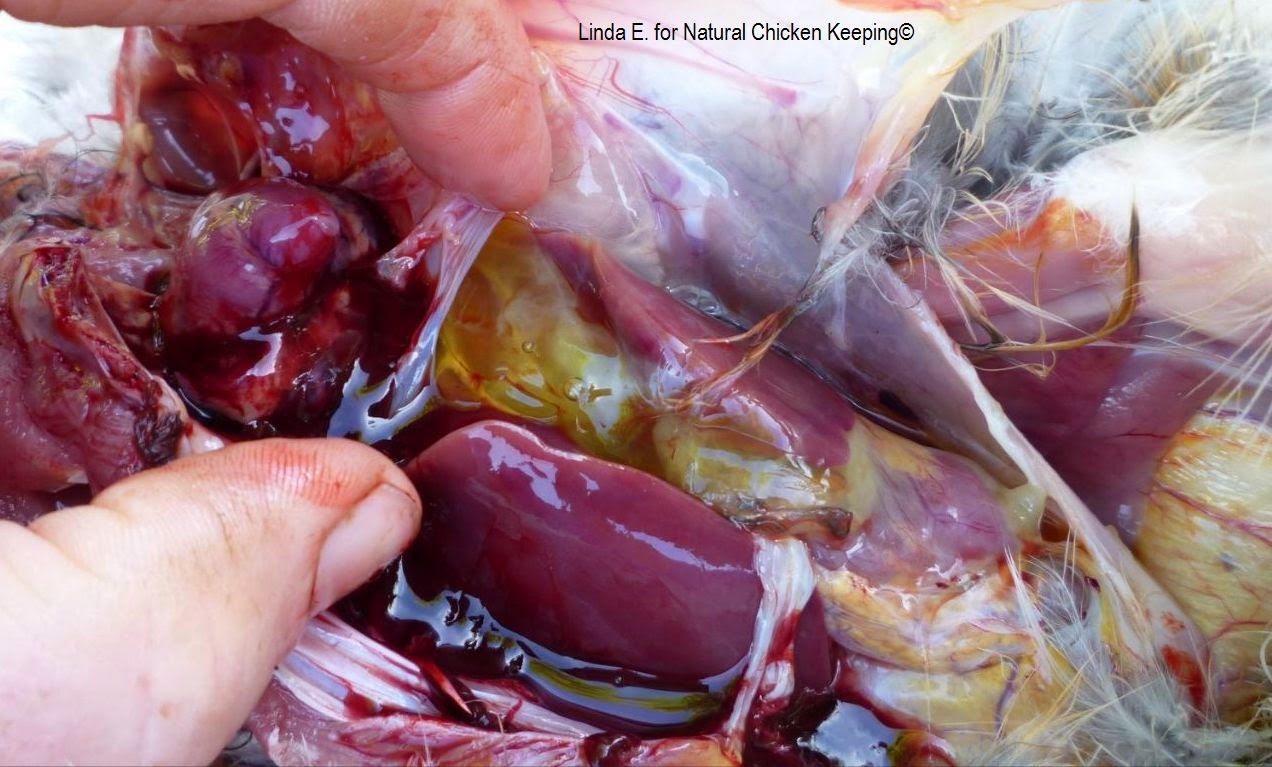 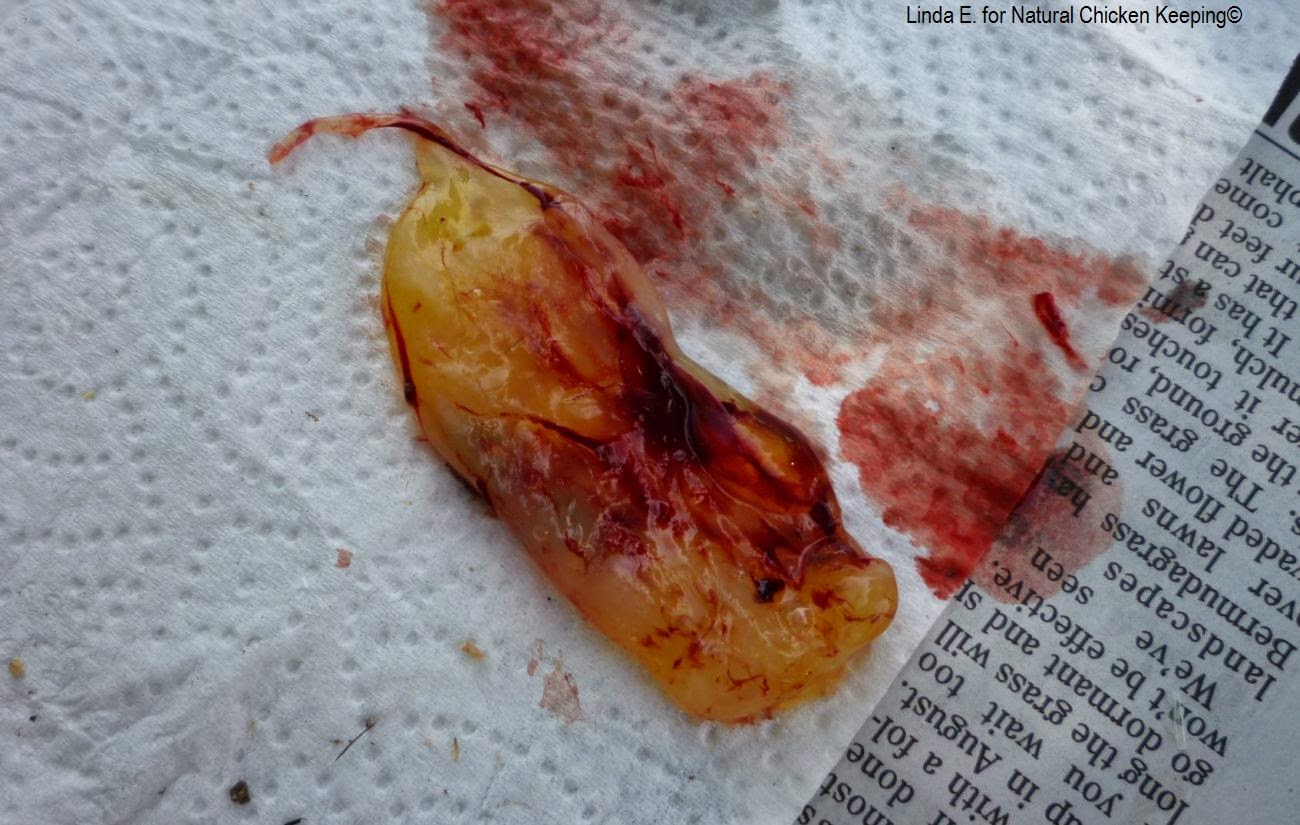 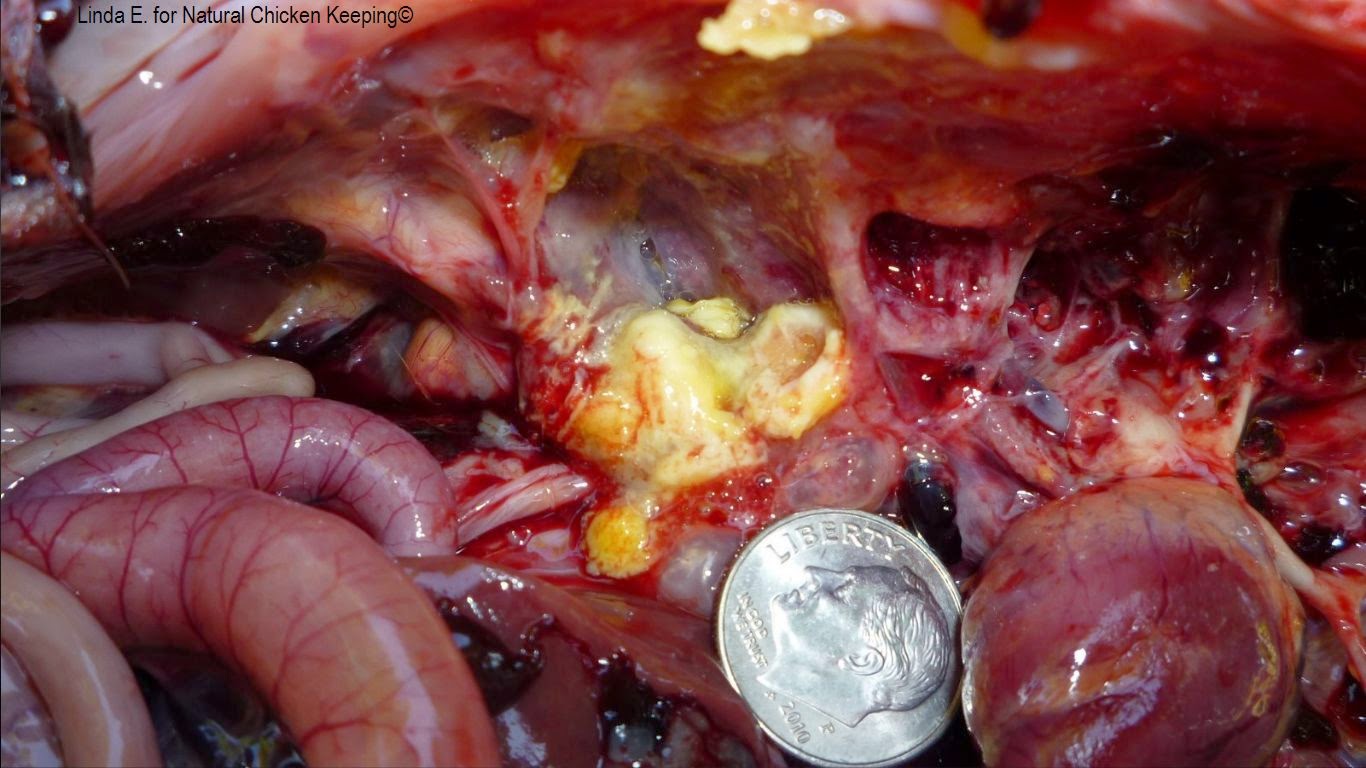 File this one under, "Stuff that shouldn't be in my chicken."

The dime is present to give an idea of the size of the yellow congealed "stuff." 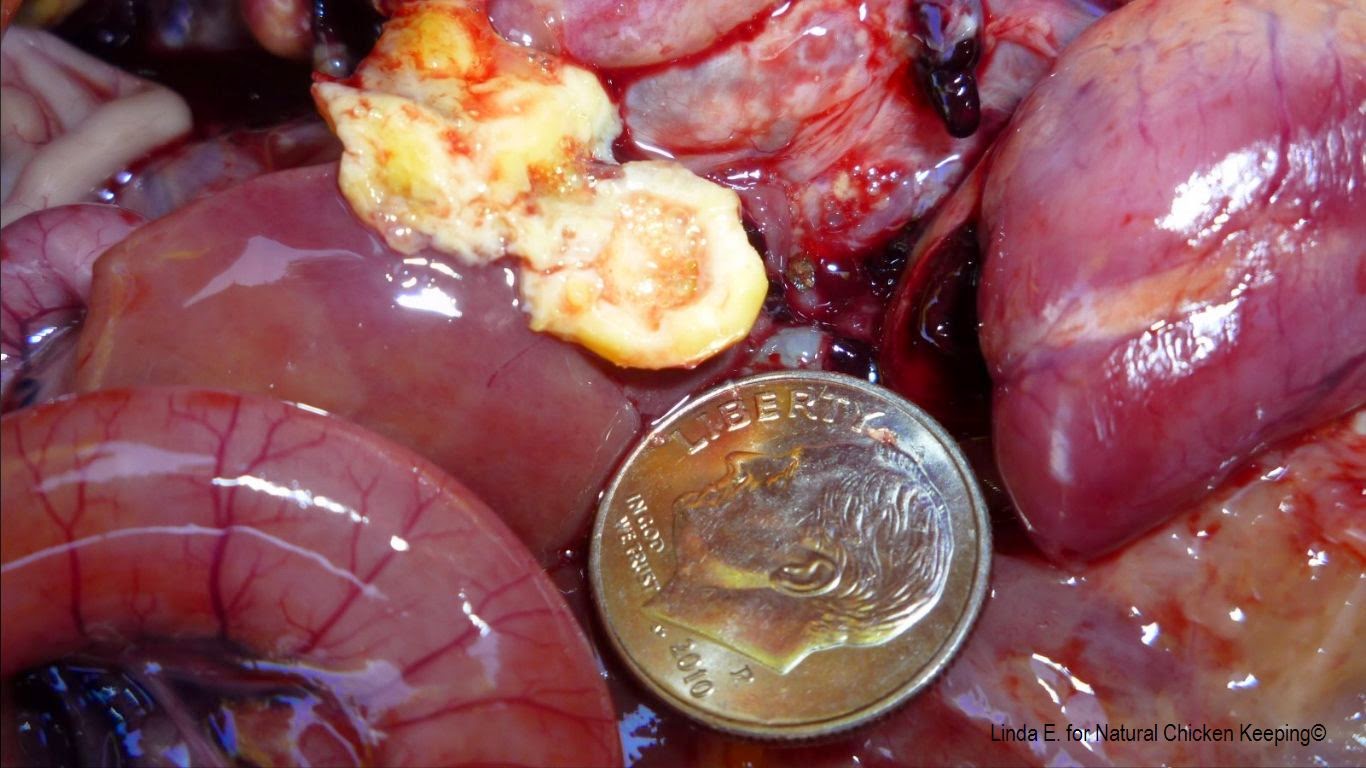 Clearly this fluid was a sign of something bad... but what?

Next Linda worked her way toward the lungs which sit up inside the ribcage, on either side of the spine.
And that's when things got interesting!

Normal chicken lungs should look rather smooth and pink like this: 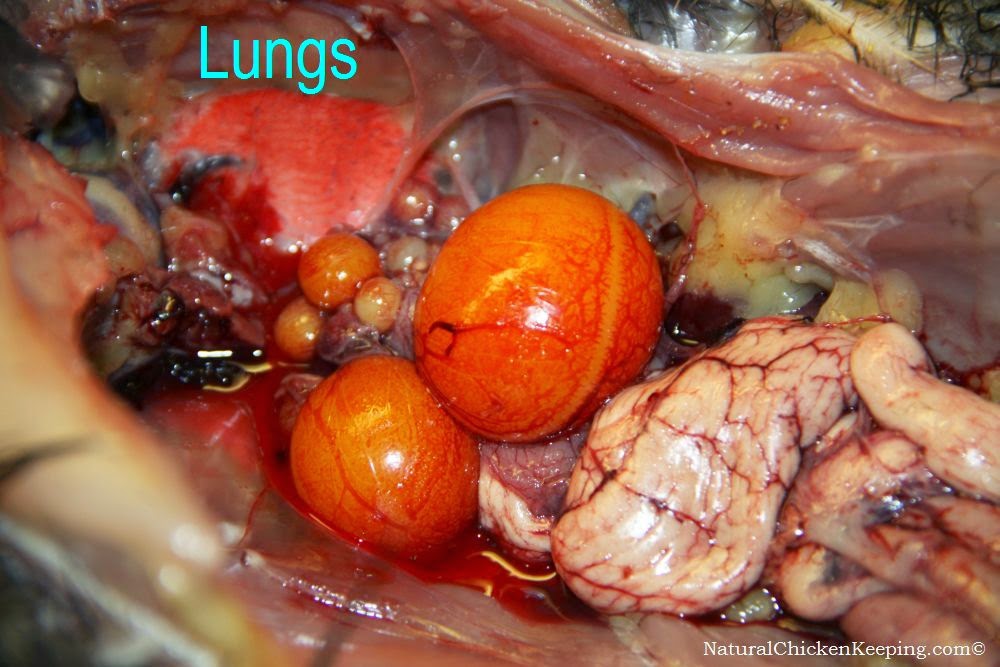 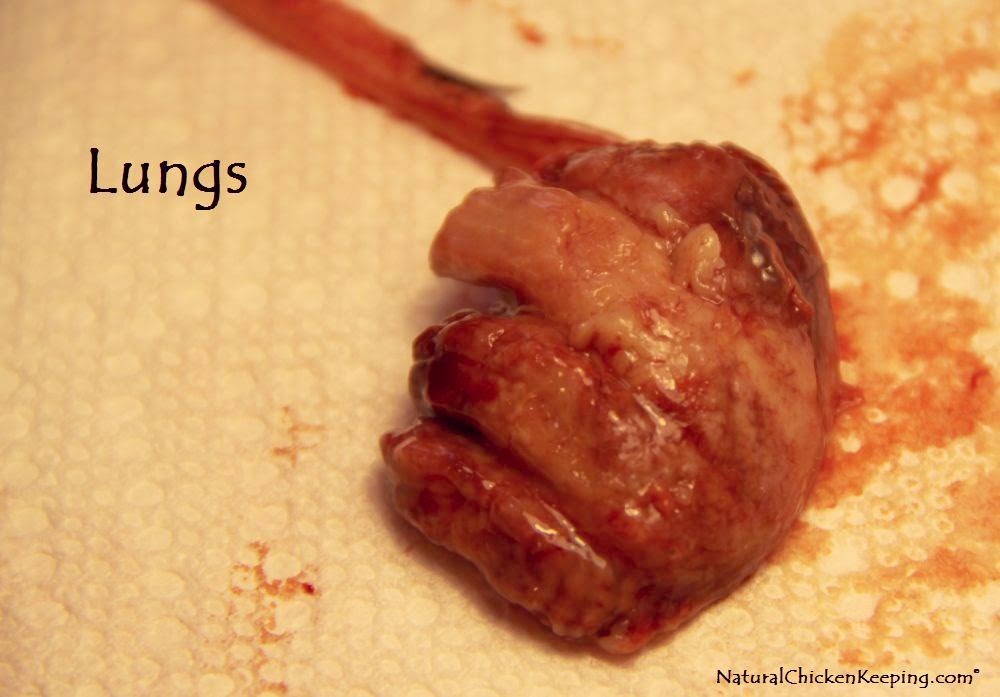 But this is what Linda found: 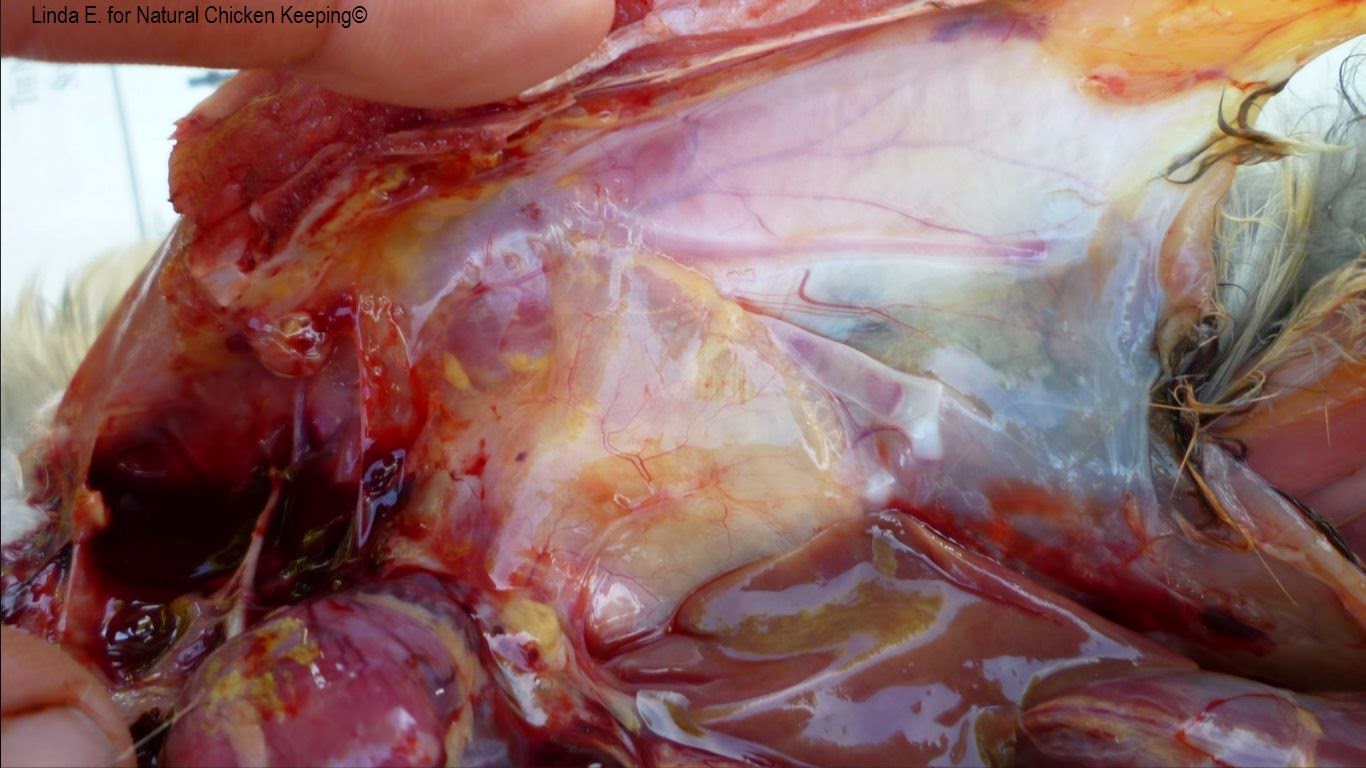 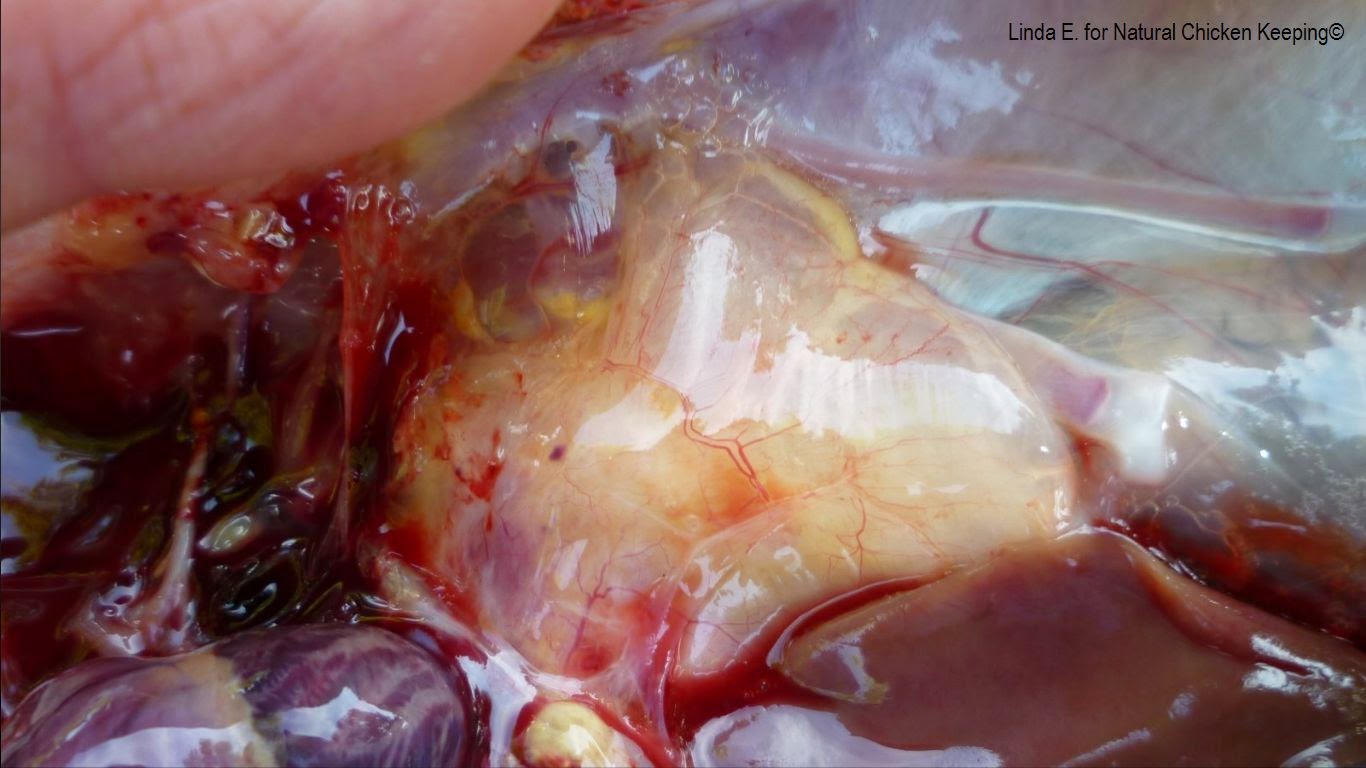 The lungs appear to be covered in yellow fluid. 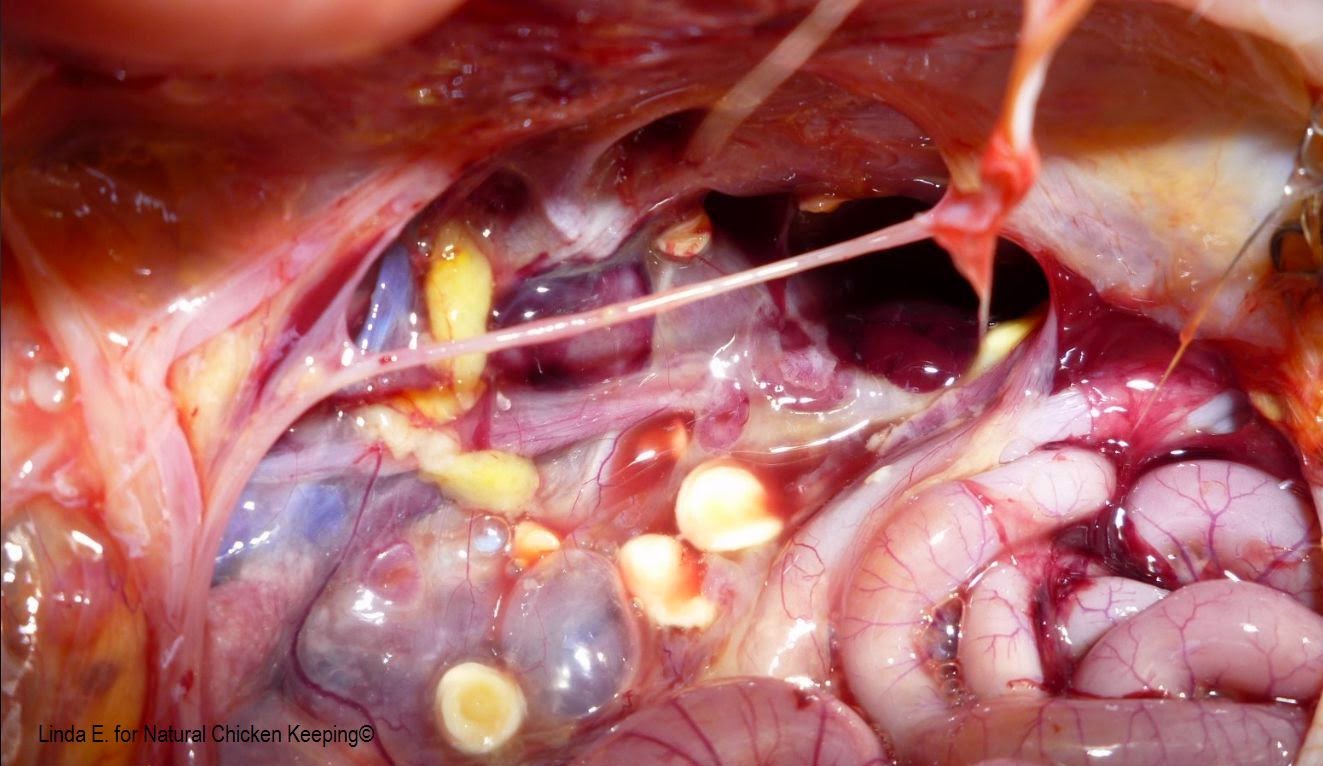 And check out these weird, round rubbery... things! 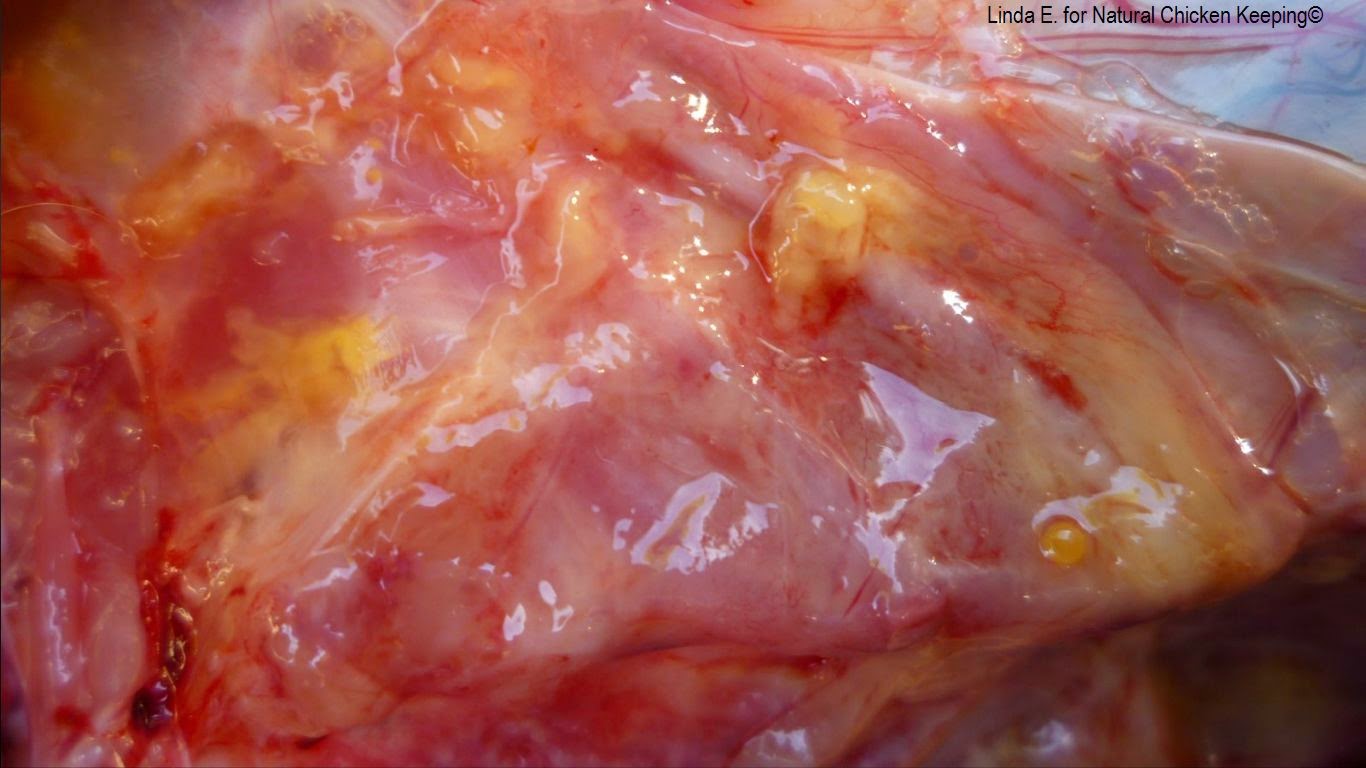 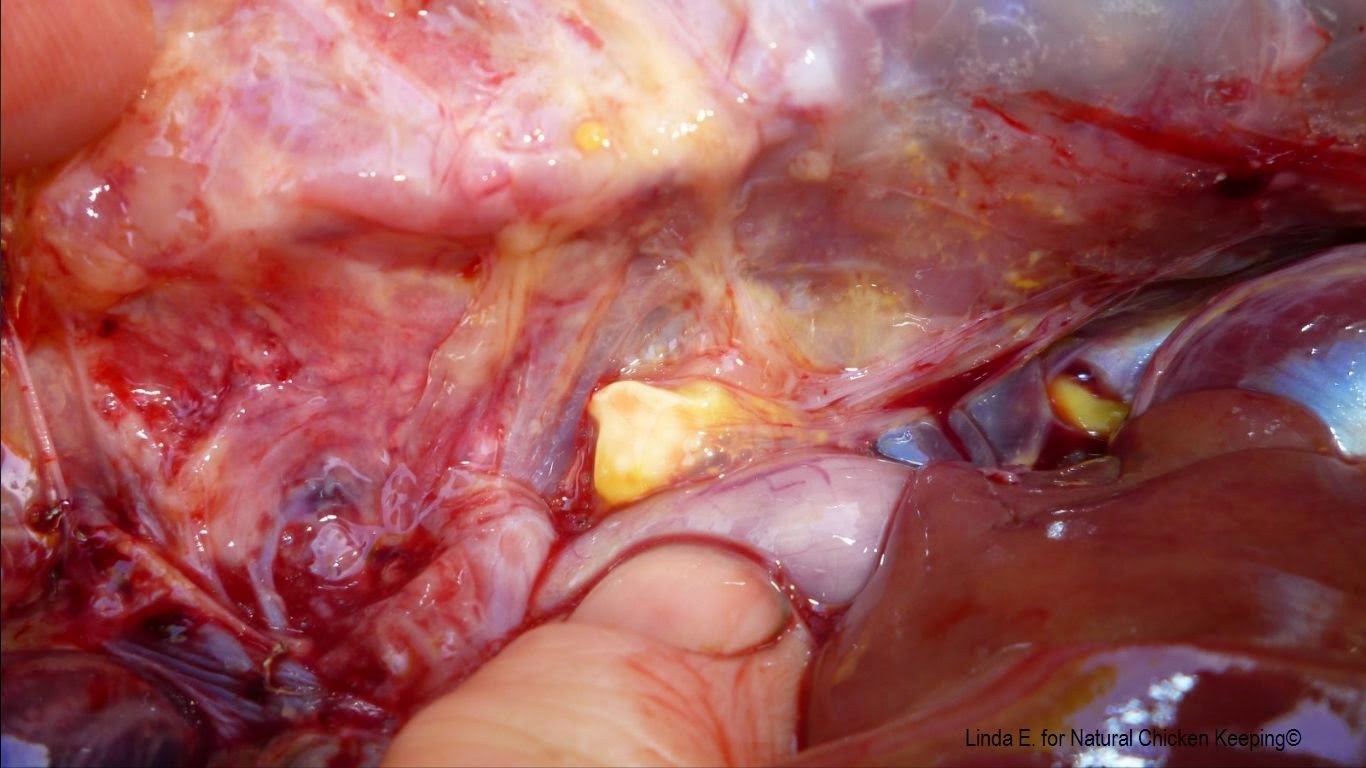 The lungs showed signs of airsaculitis and these weird, rubbery round masses. 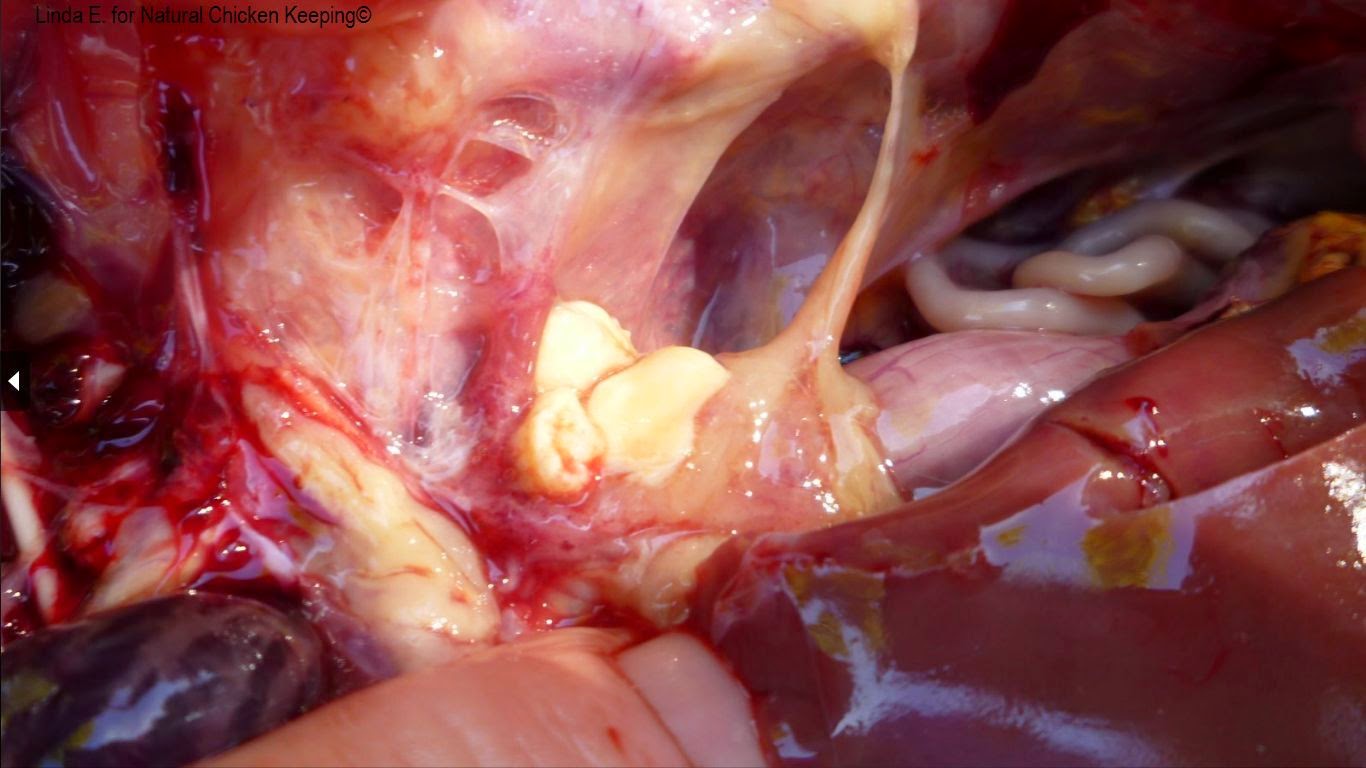 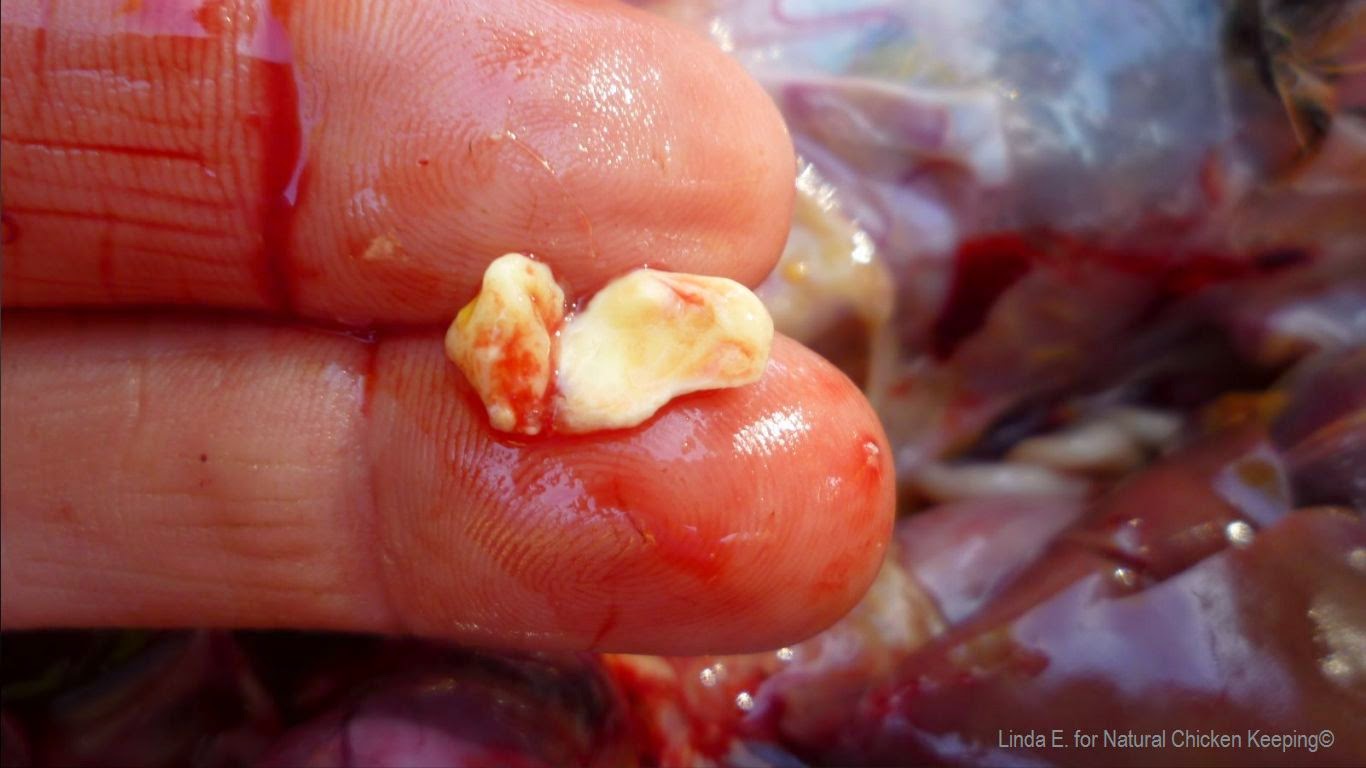 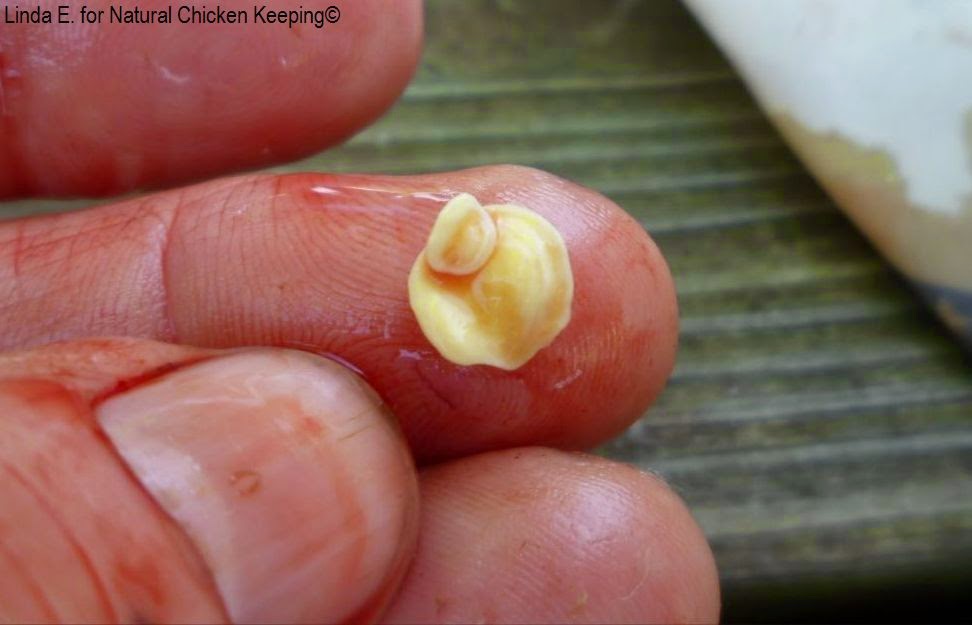 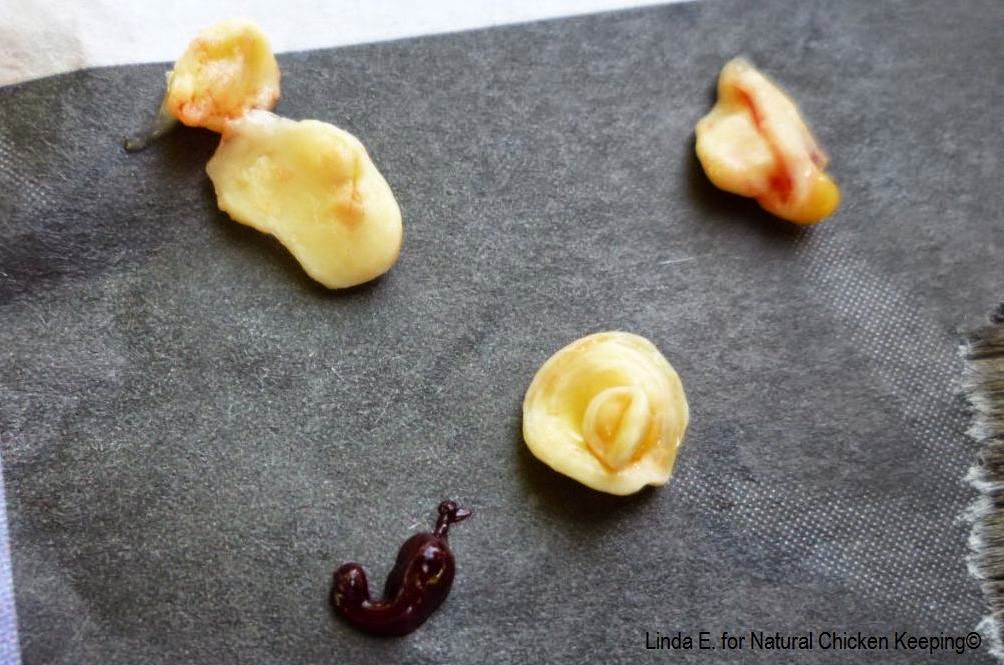 With Linda's hands still in the body cavity and her phone on her ear, I jumped on Google and did a search for Chicken Lungs  images. I had only to scroll down a little before I came across this image:

The image looked like what Linda was describing to me, so I clicked on the link (available under photo) and it took me to a page on The Poultry Site which described Aspergillosis.

Aspergillosis is  fungus that can develop in warm, wet conditions. The spores of this fungus can be inhaled by any living creature, but in most cases the body identifies the spores as a threat and attacks them. In cases where there is heavy fungus growth and where the living creature is very young, very old or immunocompromised, the inhaled spores of this fungus will begin to grow inside the lungs.

From MedlinePlus: "Aspergillosis is caused by a fungus (Aspergillus). The fungus is commonly found growing on dead leaves, stored grain, compost piles, or in other decaying vegetation."

All the puzzle pieces started to fall into place...

Because we don't have much information on the way Source #1 keeps her birds (other than the photos that Linda originally received from her with the chicks and ducklings in a damp brooder), we can only work on the assumption that the Aspergullus fungus was able to grow in the damp brooder these chicks were photographed in, or on grain in the area the brooder was kept. The spores of this fungus were then inhaled by the young chicks where they were able to grow. The stress from the prolonged shipping may or may not have played a role in further suppressing the immune systems of these birds, allowing the fungus to gain a foothold in the lungs... and the rest is illustrated rather vividly in the photos above.

Interestingly, ducks and waterfowl are not as susceptible to Aspergillosis as chickens and other land fowl species. Humans with weakened immune systems can get Aspergillosis.

While I won't advise anyone not to raise chicks and ducklings together, I will say that if you do, the brooder must be kept clean and dry. Mixing wet bedding with a heat light is great if you are shooting for your own giant petri dish, but not for raising young birds.

The same also holds true for coops. make sure your bedding stays dry in this hot weather! If water is spilled or conditions inside your coop are allowed to deteriorate to the point where there is a lot of moisture, Aspirgillus can grow. It can affect not only your birds, but the elderly and anyone else with a compromised immune system.

As for Linda, she already knows that sadly Bird B will likely not survive. Her breathing is already labored and she is unable to gain weight. She plans to use an all-natural anti-fungal cleaner called Oxine

(without the Citric Acid activator) in a standard cold water vaporizer in daily breathing treatments for the rest of the birds that came from Source #1 in hopes that it will at least slow the progress of the fungal growth.

(Oxine can be used safely around poultry and other livestock. It may be used in its activated form - with Citric Acid - to fog an entire coop and may be used *not activated* in a vaporizer to help treat respiratory ailments in poultry - including those that are fungal, viral and bacterial. Click on the image to buy this great product.)

** If you are an experienced Medical Doctor or Veterinarian
and see any inconsistencies or incorrect information in this post,
PLEASE let us know so that we may update the information accordingly. ***