The Rhode Island Red found its beginnings in the 1890’s and are the result of crossing a variety of breeds including the Black Red Malay, Buff Cochin, Hamburgh and Langshon. As its name would suggest, the breed was created in Rhode Island as a dual purpose bird (used for both eggs and meat). The plumage of the Rhode Island Red should be a rich, glossy, dark red. Hens may have some black feathering on the back while roosters should only have black in the wings and tail feathers. The earlobes and eyes should be red and the legs should be yellow. The oblong-shaped body of the RIR should be deep and broad with a wide, flat back and a medium-sized tail. 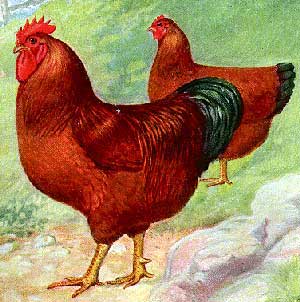 In my opinion, Rhode Island Reds (RIRs) are calm and regal birds. Not much for shenanigans. They are always busy working. I would not call these birds needy. They are just fine without the petting and picking up. They do like to hang around if you have corn though, so be careful with treats or simply don't get in the habit of giving them treats. My own RIRs will sometimes skip their FermentedFeed in the morning and just go off to forage. They are some of my heavier birds.

I believe I purchased my first RIR's from a neighbor in 1980. I also picked up a few at the State Fair. I think I may have paid $2.00 for a laying hen which was a pretty hefty price back then. A person could buy a butchered whole chicken for under a dollar and they had packaged Cornish hens - two for .99. 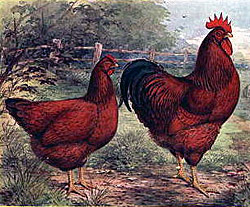 I lived really close to some big duck and chicken farms and learned really fast what not to do. I learned what to do by going to fairs and shows and asking questions. I had no interest in showing chickens, I just wanted to spend as little money as possible and grow the healthiest and biggest chickens that layed the most eggs. RIR was the best dual purpose bird that I knew of at that time. 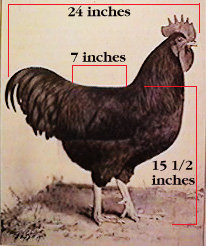 I really like this breed because it tends to be a self sustaining bird. They don’t seem to require much special attention or care. They are hardy, healthy and active, very predator aware and flock aware. They are dark rich red with some black. Nothing fancy. But if you want a good egg layer that makes a fine table fair, it is one of the best birds you will find. 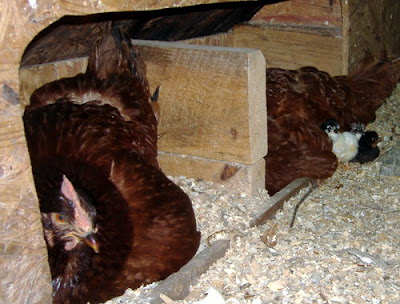 I (personally) don't know as much about the hatchery-grade RIR. I think those are generally “production reds,” but called Rhode Island Red by the hatcheries. They have been bred to lay more eggs and are often lighter in frame and color than the Heritage RIRs. 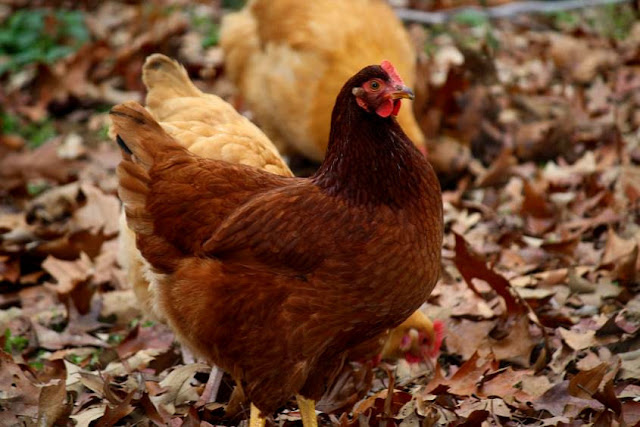 There is nothing wrong with hatchery birds if your plan is to raise them and butcher them. They work just fine for that. Just make sure you understand that for egg laying, they usually have one really good laying season… maybe two… then laying tapers off dramatically. I don’t know, but from things I have read, I sometimes wonder if some of these hatchery birds lack the resistance to illnesses and parasites that the Heritage birds have. Hatcheries do have some beautiful birds though, and it is sometimes impossible to get them any other way. 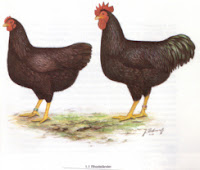 I have butchered chickens for quite some time. I raised goats, sheep, horses, cows, dogs, cats, and probably every rodent that is legal. I have never asked the vet to look at my chickens even when he came out to look at the other animals. 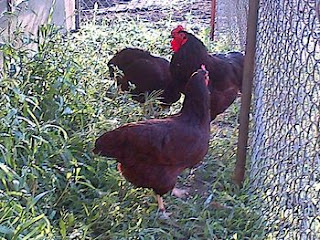 I have never used chemical wormers, drugs, antibiotics, DE or diapers on my chickens. I never felt any of these things were needed. I eat my chickens. I butcher them myself. If my chickens had worms I am pretty sure I would notice. I have fed my animals squashes, apples, onions, cucumbers, pumpkins, garlic, and they have picked through my herb garden as they free range on my property. They use the sand pit and roll in the ash of the fire pit. I have never lost a bird to disease or illness. Part of that is animal husbandry… the other part is the breed itself.

Posted by Bulldogma at 6:00 PM