Where Do Eggs Come From - How Chickens Create Eggs

Some time ago, we ran an article on this very subject, complete with artistic representations of the inner workings of a mature, laying hen. (Chickens, Eggs, Fertilization, Reproduction and Other Insider Information) Now, due to an unfortunate hawk attack, we can show you the real thing.


This past week, I lost one of my best Swedish Flower breeding hens to a hawk attack. While her loss was a real blow, it is also one of those things we have to chalk up to just being a part of keeping chickens. As upset as I was, my personal feeling is that had I allowed the body to go to waste, the hawk would have won. We can't let that happen, now can we? As a result, I now have more educational material to share.

Here is the original artistic representation posted just over a year ago: 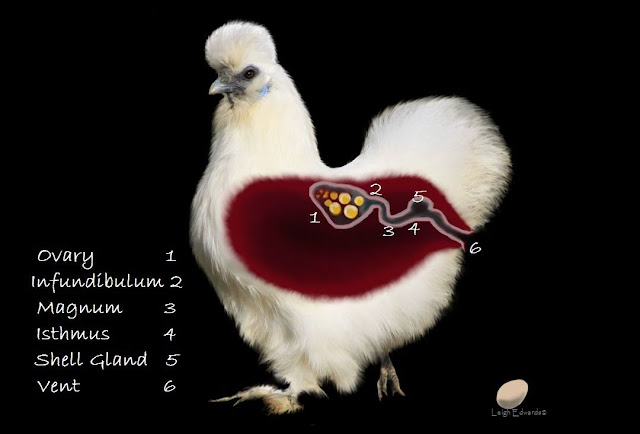 And here is the real thing: 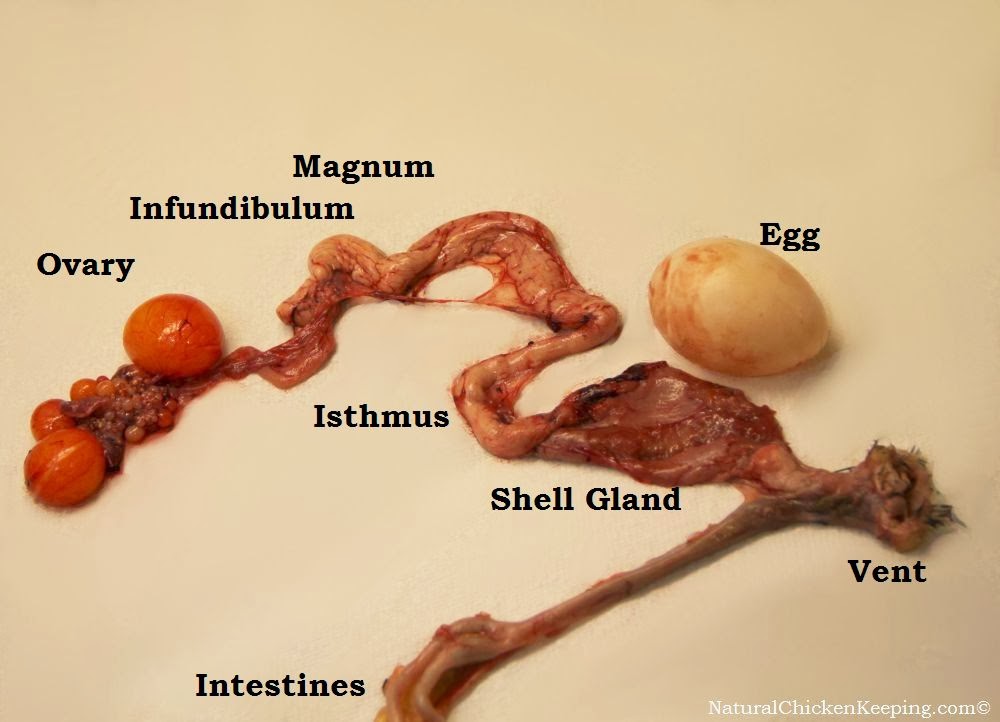 So - to rehash from last year's article:

Chickens develop and hatch with thousands of ova (yolks or undeveloped eggs) - already inside their ovary. Though chickens start out (in the egg) with two ovaries, only the left one develops and becomes active. It is this way with almost all poultry, though raptors (like the one responsible in part for the availability of these photos) differ in that generally the right side develops and not the left.

You can see Ova in various stages of development. Yes - the Ova are basically egg yolks. 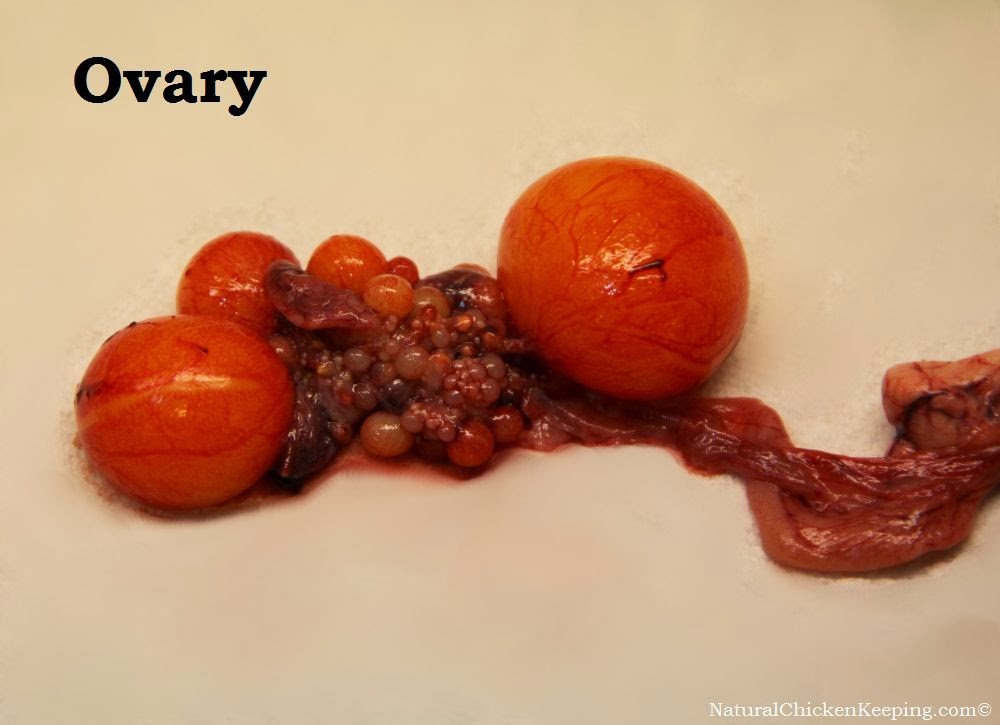 As a pullet matures, her reproductive organs mature also. From the outside we can usually see the growth and reddening of the comb and wattles... unless, that is, it is a Silkie where comb and wattles tend to be dark in color and hidden under tons of fluff.

When a mature Ovum is released from the Ovary, it is called ovulation. The entire reproductive system is called the Oviduct and  is usually between 25 and 27 inches long in a mature hen. Of course when it is still inside of the hen, it winds about so as to fit neatly where it belongs. 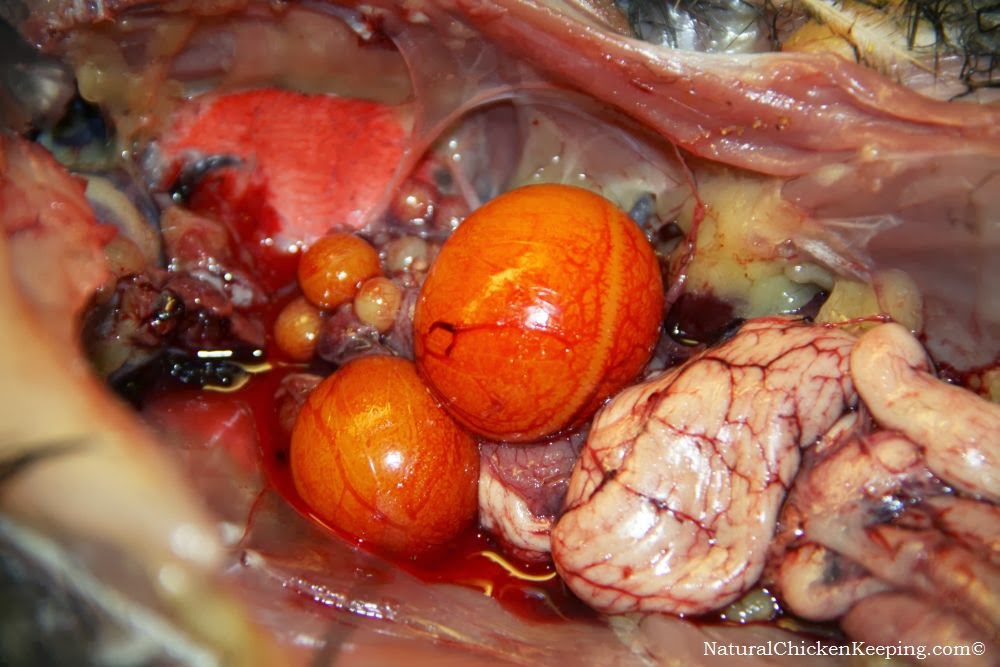 The Oviduct has five distinctive parts. The first part is the Infundibulum - When the ovum is released from the ovary, the muscle lining of the infundibulum pulls the ovum into it... sort of like a mini egg vacuum. The ovum spends about 15 to 18 minutes in this part of the oviduct.

Fascinating fact - when a rooster mates with a hen, he mounts her and, standing on her back, lowers his cloaca (vent) and the hen inverts her own cloaca to meet with his. There is no penetration, but the sperm packet released by the male is taken into the hen's cloaca or vent. For more (graphic) information about mating, see How Do Chickens "Do It?" Chicken Sex Explained. 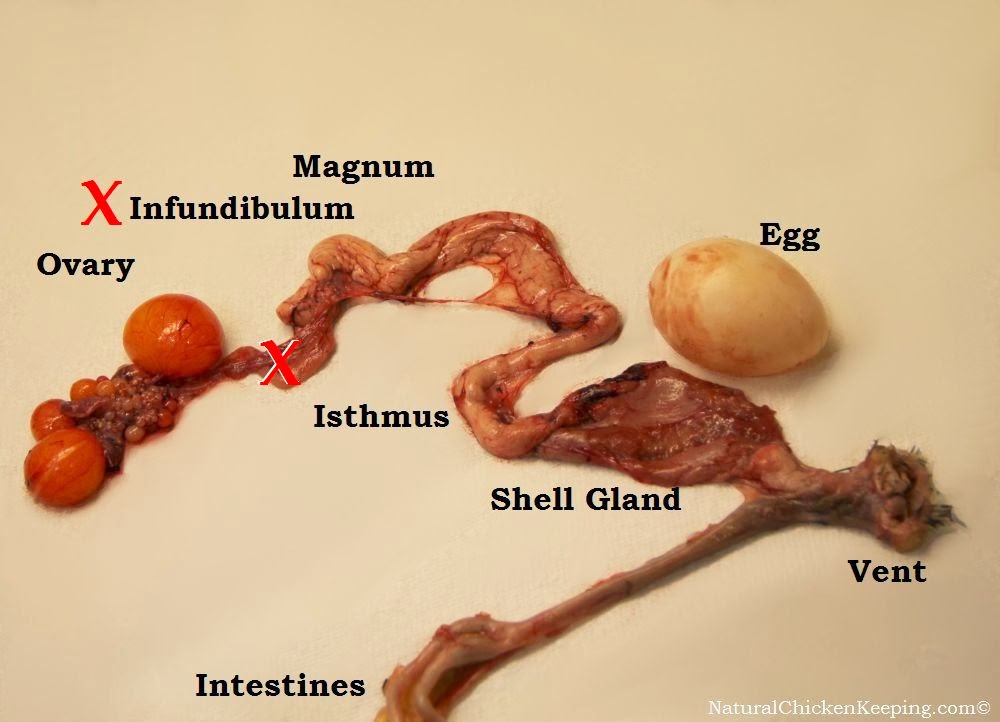 Then the fertilized (or unfertilized) ovum moves into the Magnum. The magnum is the longest section of the oviduct at roughly 13 inches in length. This is where the egg white or Albumen is added to the ovum. The ovum's trip down the magnum takes about 3 hours. 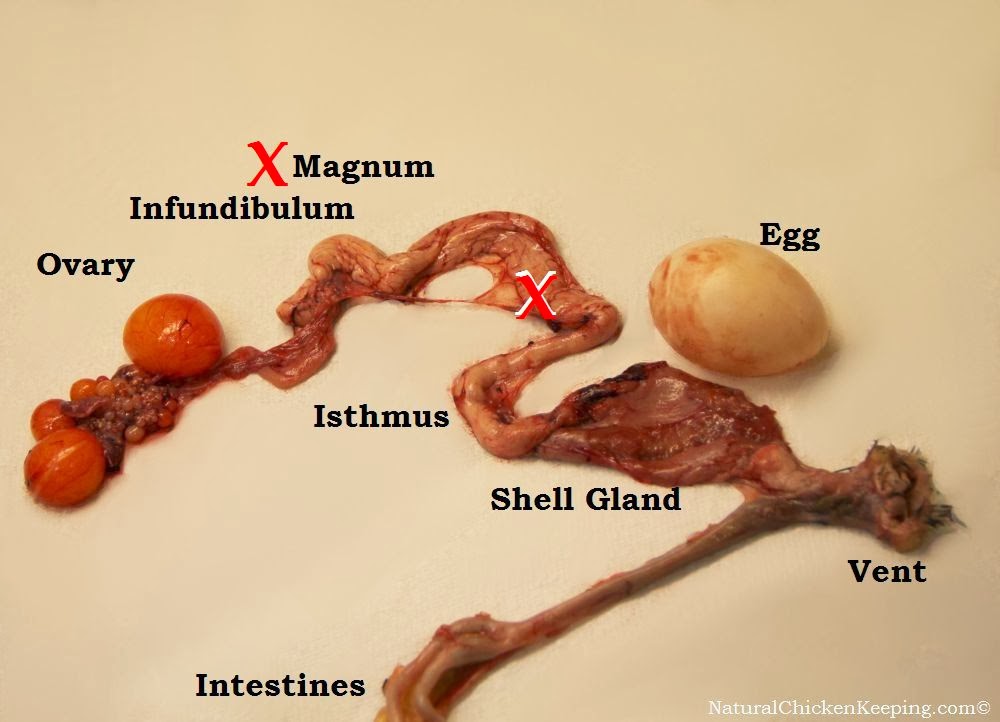 Next, the partially-constructed egg moves into the 4 inch long Isthmus where the inner and outer shell membranes are added over a period of about 75 minutes. 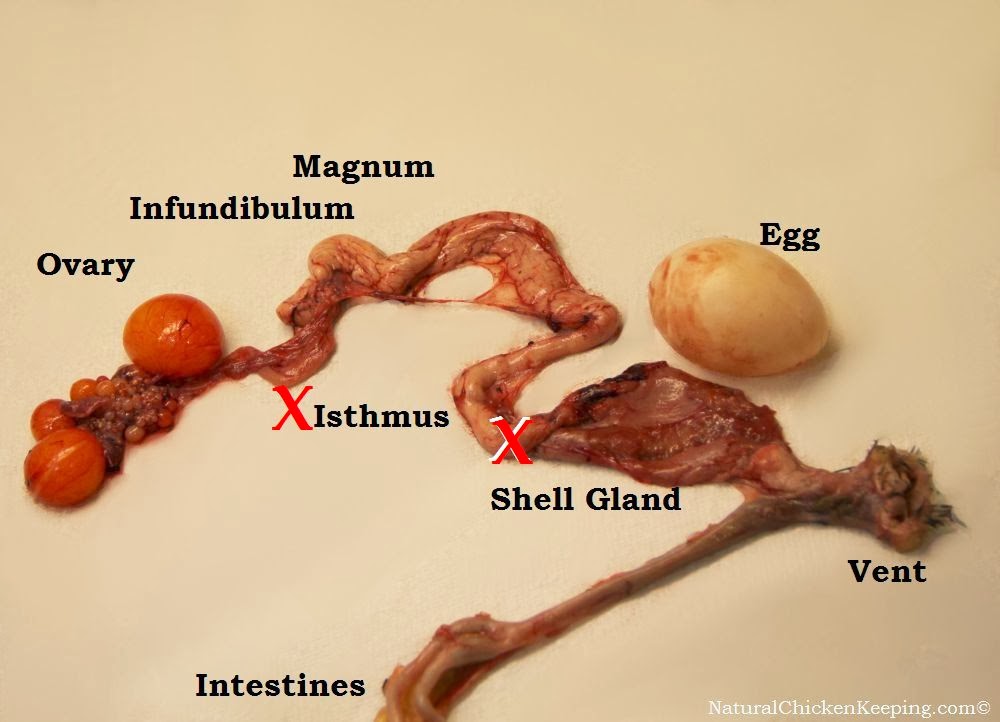 The egg then moves into the Shell Gland (Uterus) where it stays for 20 hours to have its shell constructed. The hen's body will pull some calcium from her bones and the rest from her diet to put into the shell. If the hen is of a breed that lays colored eggs, the pigment will also be put into the egg in this section of the oviduct.

Birta had an egg in her Shell Gland when she passed. It had received some calcium, but was still soft and not ready to be laid. 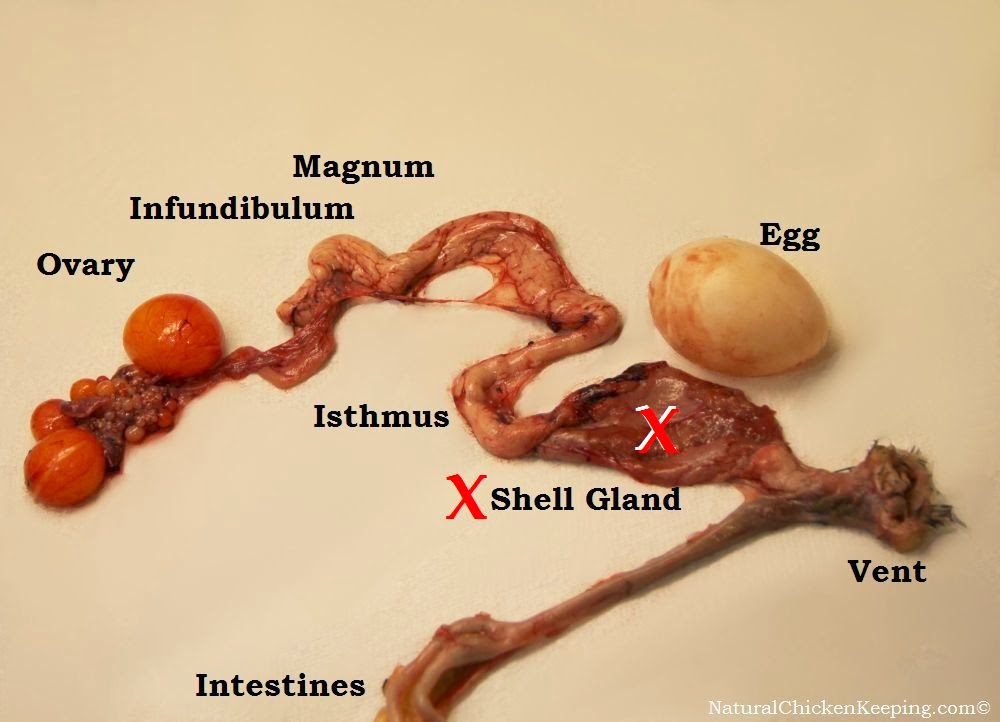 After the shell has been added, the egg moves down toward the Cloaca or Vent so that the chicken may lay the egg.

And from here the entire process starts over. Interesting facts to note, chickens rarely lay eggs after dark. It takes an average of 25 hours to form a new egg. This means that even the best layers will have to skip a day every now and then because her egg comes an hour later each day, and once she reaches point at dusk, her body will hold on to the egg until the next morning.

Thin Shelled and Soft Shelled Eggs:
Often people wonder about pullets laying shell-less eggs or irregular eggs. The best way to explain this is that as a pullet matures, all those parts of the oviduct may not be ready to create an egg all at the same time. If the Shell Gland is not ready or hasn't been able to procure enough calcium from the hen's body or diet, it may not be able to form a shell properly. It is best not to eat shell-less eggs. Feed them to your chickens - they love eggs for breakfast!

Ridged Eggs:
Hens that seem to have a habit of laying eggs with ridged or rough shells likely have an abnormality in their Shell Gland. Generally it is harmless to the hen, and perfectly safe to eat eggs with ridged shells.

Blood Spots:
Sometimes small spots of blood or meaty substances are present in eggs. This is caused when some part of the oviduct sheds material or has a broken blood vessel, and the shed matter simply gets wrapped up inside the egg when the membranes or shell is added. Though it should be fine to eat such eggs (fully cooked), that is solely up to you.

Double or Nothing - Yolks on You:
If more than one ovum is released from the ovary at the same time, it can result in a double or even triple yolked egg. Other times, the oviduct mistakes a sloughed off piece of its own material as an ovum and encases it into an egg, resulting in an egg without a yolk. In rare instances an egg can move backwards from the shell gland into the Isthmus - or even all the way to the Magnum, where extra albumen or membranes may be added. Then the egg receives yet another shell, resulting in an egg within an egg.

Eggs vs. Feces:
Oh - and one last thing... while feces and eggs both exit through the Vent, the oviduct and the end of the large intestine open right before the inside of the vent opening. This is why it is very, very uncommon to have worms inside an egg... the oviduct is placed far from the intestinal tract where parasites live to  help prevent such things. People may mistake a bit of sloughed off oviduct lining for a parasite - - because any parasite that found its way into an egg would have had to take a seriously wrong turn somewhere along the way!! Of course, it is not impossible. If it truly is a parasite inside one of your hen's eggs, it could indicate an uncommonly high parasite load in that chicken, and it would be time to take action to remedy the situation. See natural ways to rid your flock of internal parasites HERE and HERE. 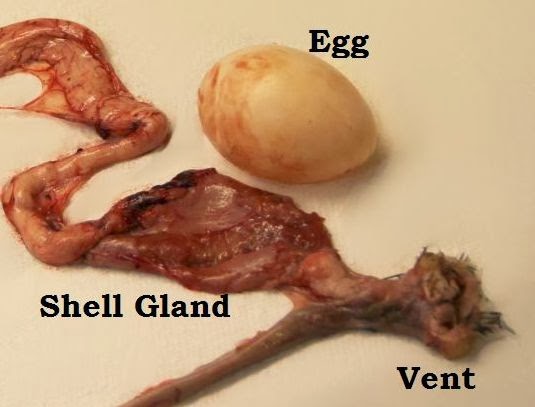 And there you have it! Eggs - The real picture. 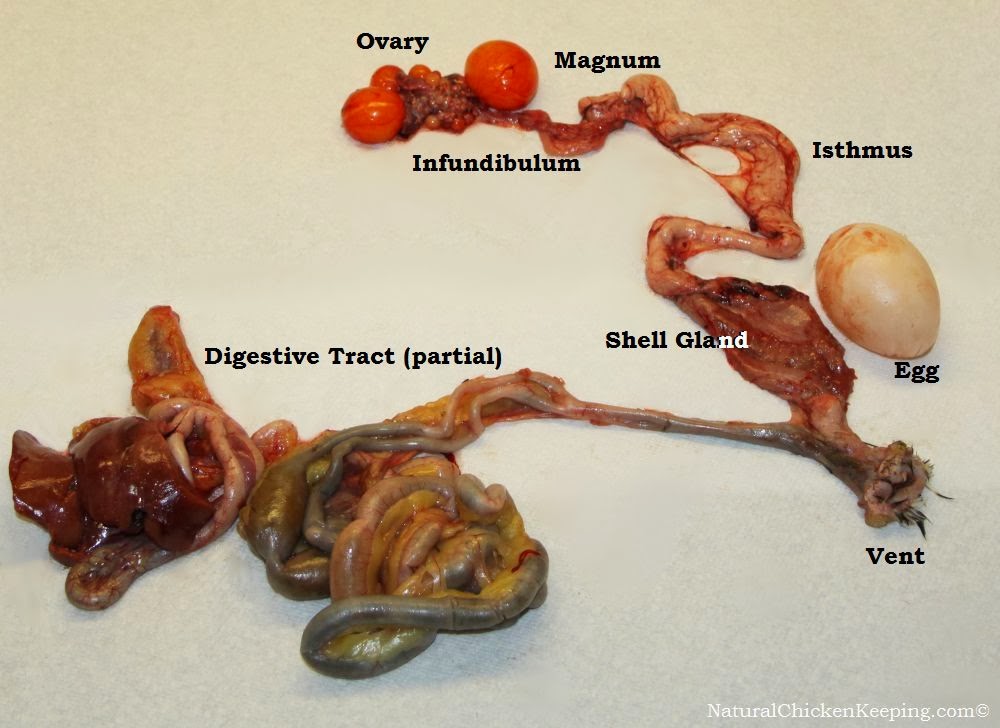 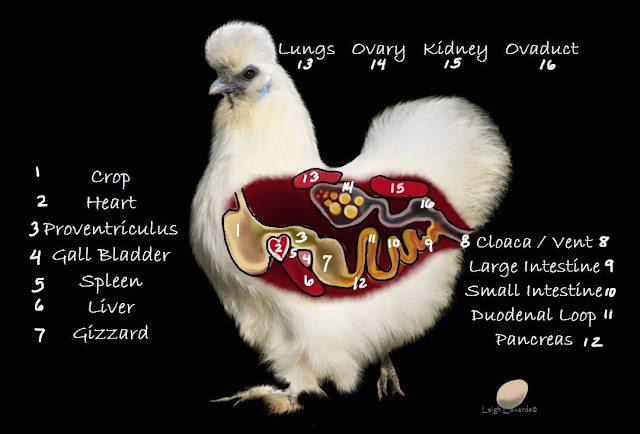