I Think the Chicken Has Gone Bad - A Humorous Anecdote

The other day we had somebody (a guy I consider my second son) help us clear out some scrap pieces of wood that were sitting in our hay shed. We have had hay in there before, but needed the extra space the wood was taking up to store more hay before the cold weather comes. We have kept a knife or two in the hay shed in the past to cut the bailing twine... keep this in mind... 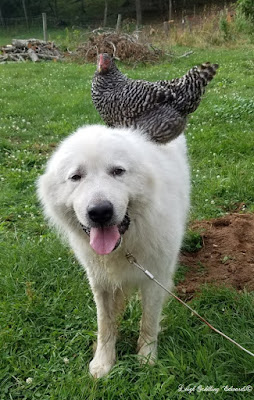 When our helper started clearing the wood out of there, many of the pieces had all kinds of bugs on them, so the chickens came flocking to take part in the bug feast. Smart man that he is, our helper would move a piece and then allow the chickens to clear all the bugs (including Brown Recluse and Black Widow spiders, earwigs and centipedes) from the wood before moving it to be stacked elsewhere. The chickens were on high-alert to grab the next luscious goody.

After our helper got down to the bottom of the scrap wood pile and was looking around to see if there were any more small pieces of wood he had missed, he stood up, turned around and saw a chicken running straight at him with a knife!

He said that at first he wondered if he was hallucinating, but then realized the chicken (aptly named Jailbird) had found the shiny knife in the loose hay and picked it up in her beak... but then she saw another tasty morsel near him and ran for it!

He has since recovered. Hey... not everybody can say they have played chicken with a knife-wielding hen! 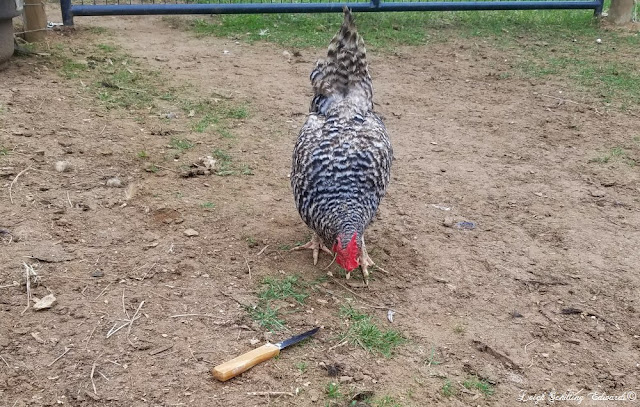 No - no pictures of the actual incident! Our helper was busy fending for his life against Jailbird who he thought was trying to shank him... and by the time he realized what was actually happening, the Barred Rock hen had dropped her weapon to grab the next creepy-crawly morsel she had found.
Posted by Bulldogma at 2:20 PM