Chicken math was kicking in and I needed a bigger coop... but with financial challenges paired with the fact that we are renting a farm that is currently on the market (meaning we could be asked to move at any time) we didn't want to spend a heap of money on something that we either couldn't move or would have to pay someone to move. So when tax refund time came around, I found this gem on Craig's List!! 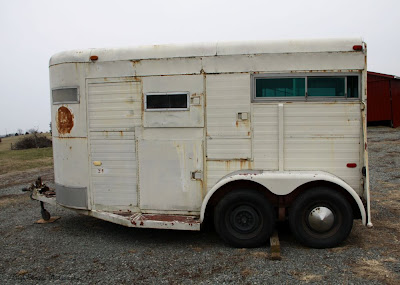 Wasn't it beeyoutifullll????? Yeah baby! That's a bona fide 1978 Hart horse trailer! The inside wasn't quite as pretty as the outside, but a creative gal with a lot of imagination can see beyond the little things... like massive rust-through areas and a roof that leaked like a sieve in the gentlest of rains.

What drew me to this particular trailer was all the doors and compartments. More on that later. 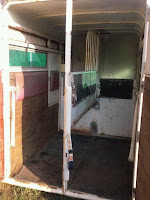 Needless to say, I got it for a steal. It really wasn't in good enough shape to put horses into, but heck - chickens weigh a lot less than horses! Of course my family, friends (and landlords) all thought I had finally lost my last marble. The landlords were especially queasy with this awful-looking old piece of garbage parked on their beautiful property. (I call that "renter's insurance!") But seriously - we really like our landlords and we respect their desire to keep the property looking nice!

When people tell me I can't do something, it makes me want to prove that I can. Such was the case with the folks that told me I'd be nuts to try to restore and paint a fairly large trailer by myself... but since I'm already quite aware that I'm a few sandwiches short of a picnic, I went right out and bought paint! I chose Rustoleum for obvious reasons.

But... I'm afraid it got worse before it got better.

I started by scraping and sanding rusty areas, ripping out the parts that I wouldn't need (with the help of my husband and 18-year-old son) and calking every last seam and hole. 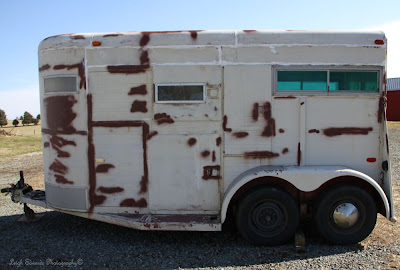 Initially I thought about going with a barnyard red to match the stable and storage barns on the property, but unfortunately my local hardware store only sold that color by the quart... and I was going to need a little more than a quart! There was "Safety Red" which translates into "Fire Engine Red" but I didn't think it would be polite to adorn this beautiful farm with something that more than slightly resembled an emergency vehicle... though it crossed my mind that I could pick up a red, flashing light somewhere and have a little fun with passer-bys.

The only Rustoleum colors sold by the gallon were white (which wouldn't really blend into the surroundings), black (which had the potential of becoming so hot in the summer time my chickens would be laying hard-boiled eggs), gray (bleh) or hunter green.

I went with the hunter green... and fought the urge to buy bright yellow as an accent color... (you can see were I'm going with this... )

Giggling under my husband's hairy eyeball, I took my hand away from the bright yellow and grabbed "Almond" instead. A lighter color on the roof should help keep the coop cooler in the summer.

Yes - it was a big project inside and out, but I'm almost finished and it has been well worth it! I just put my chicks in the chick area, and I have a bantam cochin with an injured hip in one of the isolation cages...   but I guess I'm getting ahead of myself a bit.

Was I able to paint the entire trailer myself?  Why yes, I was! 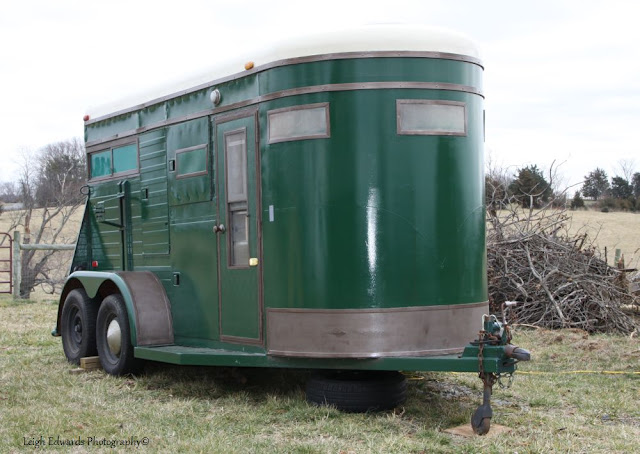 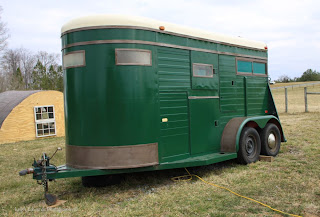 I felt the original color of the aluminum trim created too much of a contrast. 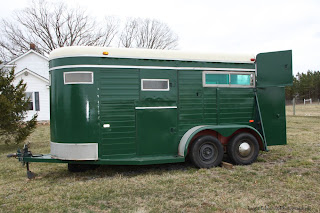 It was flashy, and while I'm all about flashy, the coop is supposed to be subtle and blend into the surroundings. (Otherwise you know I would have gone with fire engine red and flashing lights!) So I found this cool Rustoleum hammered metal spray paint which really helped to subdue the trim. Not only that, but since the trailer is so old, it has a lot of... um... character? (By that I mean really pocked, puckered and dented areas.) The hammered metal paint just made it look like it was supposed to be all beaten up like that. So let me give you a brief "before and after" tour.

The front "dressing room" used to have some lovely red carpet perfumed with eau de cat toilette, and the paint apparently had fowl pox. 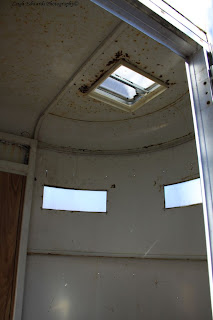 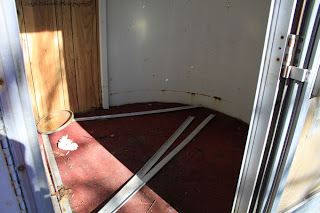 BUT... the area also had a seam that was perfect for putting a shelf on... but not just a shelf!
The space under the shelf made the perfect "grow-out" pen for chicks! And I can heat this entire
room. 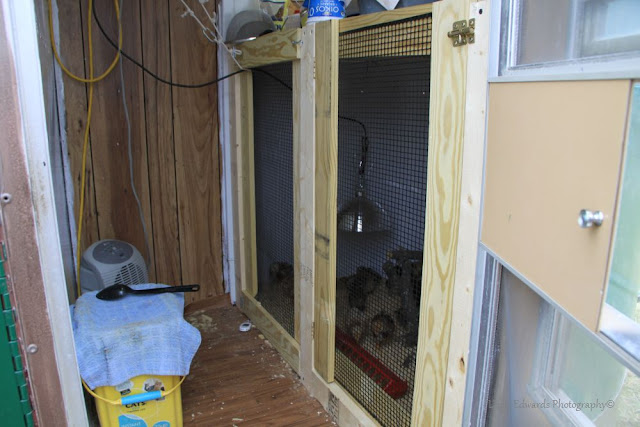 (Yes - that is my Fermented Feed down to the left!) 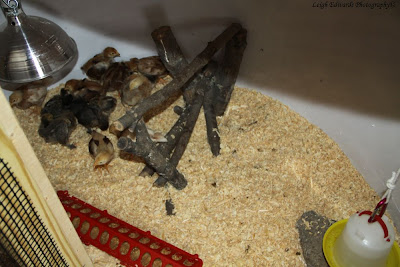 The grow-out pen is 5' wide by 3' deep and has double doors for easy access and cleaning. I covered the entire floor with cheap linoleum I had left over from my last coop project.

The neat thing is that if I find I need more coop space, the whole 5' x 5' area above and around the grow-out pen could be used to house up to 6 large fowl chickens. (I prefer a minimum of 4 sq. ft. per bird of coop space, not including the run.) Of course then I'd have to put all my lovely "stuff" into the storage area... which would be fine, too. 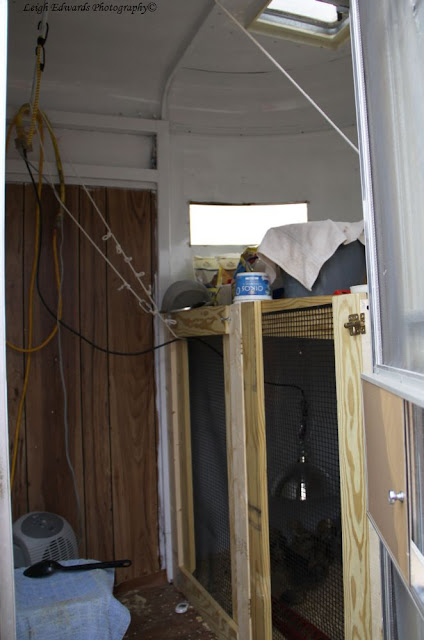 Right next door to the front part is the storage area: 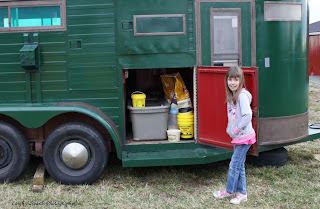 (I had my hubby saw out the lovely red pleather saddle rack, but we left the hooks as they might be useful for hanging stuff. The "Before" picture is the left side and the "After picture is the right.)
The storage area is 2'6" wide x 5' deep x 2'6" high and holds all my feed, bedding, rakes and tons of other necessary "stuff." In fact, my house is starting to look pretty empty now I have all the chicken stuff out in the coop. There are access doors on both sides of the trailer so I can really pack stuff in there without having to dig too much to get something I need.

Above the storage access doors are access doors to an area where one would have put hay for the horses to eat whilst driving about town. These two areas are now isolation areas for injured (but not contagious) birds or broody hens and their eggs or chicks. 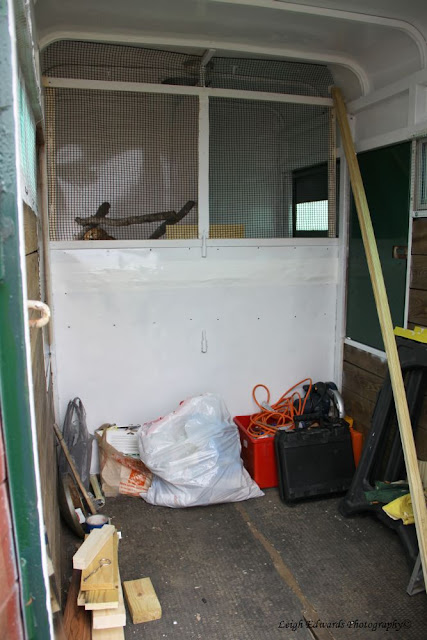 See that green door just above the boxes of tools? You can't see it in this shot, but there is one on the other side also. We are going to be taking that wood that is currently unceremoniously leaned up against the right side of the ceiling and making hardware cloth-covered "screen doors" for each side so that in the warmer months these two doors can be left open at all times to take advantage of the cross breeze. Both doors will be on hinges just in case we ever need more access points.

There are also sliding windows on both sides which we have covered with hardware cloth. These will also be left open year round for ventilation. 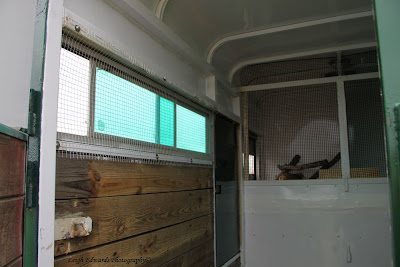 You can't really see it in any of my photos, but there is also a ceiling vent in the main part of the trailer... I'm big on ventilation!

At this point we still have to finish afore-mentioned screen doors, hang the perches, put bedding down and put birds in. There's also a little matter about fencing in an area to contain my flock... because one of my roosters has been going over to my neighbor's house and serenading her with the song of his people through her kitchen window. She's not as enamored with his song as his hens are.

I'm looking into electric poultry netting. Since this setup does not have an attached run (yet) I want to wait until the fencing is up before putting the birds in here.

I will make an update post (with plenty of photos) when we are done.

Click Here to See Part II of this project!