Being a chicken keeper is a daunting task if you are raising chicks yourself for the first time. You can read every book, and look at every chicken-related website, but it’s just like having children for the first time. There are situations you won’t find answers to anywhere and have to come up with your own plan of attack.

We raise our chickens ultra-organically. I say that because we go above and beyond what is called for in organic poultry keeping rules and regulations. While there is much discussion on feed and environment, when it comes to what our birds will eat or drink from is considered  standard, but not anything that could or should be considered organic and non-toxic. After all, we are what we eat, eats.

Having overcome an “incurable” autoimmune condition 8 years ago, I am always on the alert to anything potentially toxic to my health, and as a result, I carry that awareness into how I keep all my animals, furred and feathered.

When we first decided to raise chicks in 2013, every poultry supplier offered the typical plastic feeders and waterers. Plastic is nothing more than a composition of chemicals that will not only off-gas, but will leach out toxins that are endocrine disrupters. Old plastic, and plastic that is worn or has scratches is even more prone to leaching toxins. I do not store any food articles in plastic and I surely do not drink from it either. How could I possibly subject my chickens to that, especially with their sharp beaks and claws? 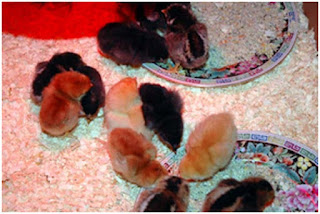 The search was on to find something the chicks could eat and drink out of that was non-reactive and not subject to toxic leaching.

Our first attempt to feed our chicks non-toxically was by using our china plates. They were low, fairly flat, and the chicks could easily reach their food. It seemed like a great idea at the time, but I quickly became alarmed at how slippery the plates were. 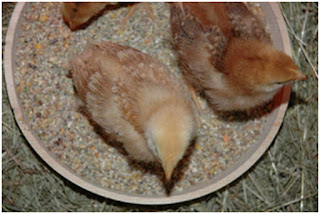 I needed something coarse that wouldn’t harm their feet and approached my husband for the answer. He is a wood-turner enthusiast and quickly turned out “dishes” on the lathe of non-toxic wood. He left them coarse with all of the lathe ridges,  sanded them lightly so they had no splinters, and were finish-free.

It was a great resolution, but the fact that they were wood made washing and disinfecting somewhat problematic, and without some type of finish, they couldn’t hold liquid. 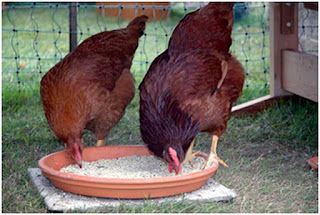 The answer came to me one day while watering my houseplants, and it is something we continue to use. I have Italian terracotta drip catchers under my potted plants. These can be purchased at big box stores such as Home Depot and Lowe’s, although I purchased the majority of mine at a small garden store. I prefer the Italian terracotta over clay made in China. The Italian terracotta is heavy, deep red, and is stamped “Made in Italy.” It is a smooth surface, yet it is rough and not slippery. As the chicks grew to adulthood, the terracotta plates also grew in size.

Some might argue that chickens will waste their food by scratching it out of the plates. It’s never a concern for us because the chickens would rather eat their food off the ground, the way they evolved to do, before eating out of a plate. We’ve had last year’s food left on the ground and covered for snow for several months. As the snow recedes and that soggy, almost sprouting food is uncovered, the chickens spend hours clawing through the mud to eat their soggy leftover food before touching a pristine bowl of food. As you may have guessed, our chickens eat a mixture of food that we make for them ourselves from certified organic human-grade raw ingredients. If you feed you chickens pellets, this might not work for you.

We also store all of their feed ingredients in air and water-tight stainless steel containers large enough to hold 25 pounds. We also store their cracked feed in these containers. They are purchased from Life Without Plastic, a Canadian company that has a warehouse in, and ships from the US.

With the issue of non-plastic, non-toxic, non-slippery, and easy access chick feeders resolved, the search for something non-toxic for the chicks to drink from began long before the chicks arrived. Glass is non-reactive and my heart would sink every time I found a glass poultry waterer. While the bulb might be glass, the actual water reservoir would be plastic. Some very old versions had metal reservoirs that rusted over time. 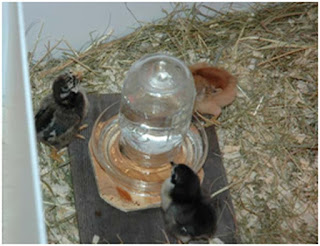 Ebay to the rescue! I found several vintage glass poultry waterer bases that work with small-mouthed canning jars, or just about any small-mouthed glass jar. Finding bases that were not chipped or cracked was not too difficult, and I bought several. Those waterers have been packed and stored in a closet for 4 years, only to be brought into service once again for our current batch of newly hatched chicks. One can still find these waterers on eBay for under $10.

I’ve read recommendations of filling a bowl with pebbles and water. The pebbles would have to be very clean, not subjected to any type of pesticide or herbicide, gasoline, color additives, or contain natural metals such as iron. I’ve read suggestions of using glass beads, the type used in glass vase flower arranging. Our home once belonged to a florist and we discovered an area in the yard that the chickens had unearthed contained several of these glass beads. One of our chickens ate one, and to this day it remains lodged in her gizzard. Because she hasn’t suffered any ill effects from it, and it isn’t life threatening, our avian vet feels surgery to remove it would cause more harm than just leaving it where it is, but I’d rather she hadn’t found it and eaten it.

Once the chicks had grown to the point where the fear of them drowning had passed, we changed their waterers again. Our chickens do not drink a lot of water. With a current flock of 8 adults and 18 chicks, water consumption is less than a quart per day, slightly more if it’s really hot weather.

In the search for a large non-toxic, non-breakable, easy to clean and sanitize waterer, preferably stainless steel, I was excited to learn of the nipple system. But while the nipples themselves may be non-toxic, one has to take a closer look at the water source.

Many of these watering systems involve the use of PVC pipe, or polyvinyl chloride. It is comprised of phthalates, Bisphol A (BPA), and high levels of chlorine and dioxins. Phthalates and BPA are endocrine disrupters that can interfere with the production of hormones, are carcinogenic. Dioxins can cause reproductive, developmental and other health problems. Additionally, PVC can degrade and slough off when exposed to the elements, UV rays in particular. PVC powders are deemed highly toxic.

The other health hazard related to this type of pipe is the cement used to join sections and joints together. It is a cement containing a catalyst that softens the PVC, and then hardens it, giving off hazardous vapors when fusing. A warning comes with it to avoid skin contact because it can cause chemical burns.

For all of these reasons, PVC pipe is typically used for removal of sewage and waste water, not for drinking water.

In some instances, these nipples are inserted into plastic and metal containers, using silicone to affix them and make them leak-proof. Here again plastic is involved, or metal that may rust or contain lead, and silicone. Silicone is comprised of synthetic polymerized siloxanes, and is considered toxic.

Other choices for water delivery are hoses, and piping systems that may contain high levels of lead.

I have a very simple rule of thumb. If I won’t eat or drink it, or consume anything from it, then I won’t expose my animals to it either. Not only could these toxins harm them in the long term, whatever they eat or drink will eventually end up on my plate.

The obvious choice was a stainless steel dog water bowl. We have several, one in every area the chickens forage and congregate in each day. 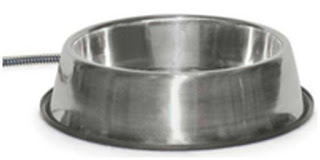 But what about winters? Even though we live in an area of the country with extremely cold winters, our chickens are out of the coop and free to be in protected areas where the ground temperature is usually above freezing, but sometimes not. To keep their water from freezing, we use electrified stainless steel thermal dog water bowls. They are by K&H Manufacturing and available on Amazon for under $30. We’ve been using the same electric thermal bowls for 4 winters and they are easy to clean and have worked perfectly. The water will not feel warm, but will be just warm enough not to freeze. And as a safety tip, the power to our chicken areas is Armored BX cable in a grounded electrical box well above ground level. Never use uncovered electrical wire, or an extension cord. Again, we have a small flock and these thermal bowls work for us, but may not work for someone with a large flock.

** Ginny Chandoha is a published writer and author of LichenSclerosis: Beating the Disease, in which she describes her journey from her 2009 diagnosis of the rare and incurable auto-immune disorder, her development of a healing protocol, and her complete recovery and return to full health. Her short stories have appeared in The Staying Sane book series by DaCapo Press. She and her husband live in northern New England and organically raise chickens and grow organic vegetables.